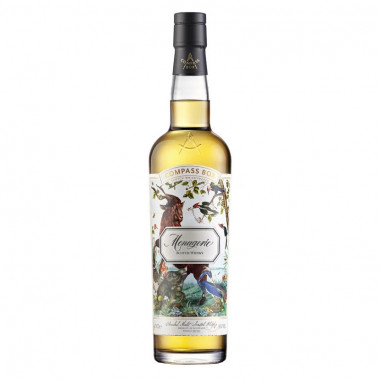 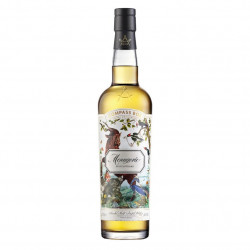 Discover the wild side of Scotch Whisky with the new limited edition Menagerie of Compass Box, assembled by John Glaser.

Discover the wild side of Scotch Whisky with the new limited edition Menagerie of Compass Box, assembled by John Glaser.

The animals represented on the label of the bottle represent the five distilleries that go into the composition of Blended Whisky:

- the ibex represents the power and grace of the Mortlach distillery,

- the woodpecker refers to the woody notes full of energy and gluttony of a blend of Highland Malts aged in French oak barrels,

- the large exotic bird symbolizes tropical fruits and leathery notes of the expression of the Glen Elgin distillery aged in Sherry, Bourbon and Hogshead barrels,

- the turtle pays homage to the monstrously earthy character of Laphroaig aged in Hogshead casks,

- the wild boar represents the animal and herbaceous notes of the expression of the Deanston distillery aged in Sherry butt and Hogshead casks.