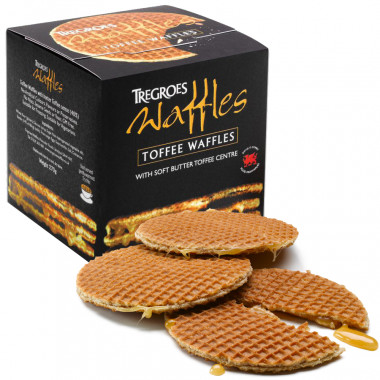 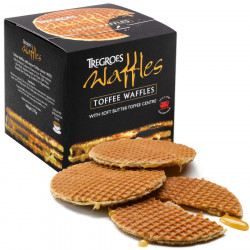 Lightly crunchy waffles with a smooth salted caramel heart and a touch of cinnamon.

Discover these delicious toffee waffles! Small, slightly crunchy wafers with a creamy salted caramel heart and a touch of cinnamon.

Place your waffle on your cup of tea, just enough to warm the cookie and make it smooth.

Tregroes Waffles is a small, family owned bakery located in South West Wales. They began in 1983 by tasting their recipes for railroad passengers. A real success. Today, Tregroes Waffles are made from quality ingredients and are the pride of the region.

Tregroes Waffles is based in the beautiful region of Teifi, West Wales and has been producing gourmet waffles for almost 40 years from the finest ingredients: caramel, chocolate...

The adventure began in 1983 when Kees Huysmans, a Dutchman recently settled in the region, began producing waffles from a specially adapted recipe from his country.

In Tregroes, the shop and production occupies the three floors of Kees Huysmans' house, from the basement with the ingredients stored to the floors with the mixing of the dough, the laying of the toppings by hand, the oven and the offices.

In 1994, faced with the success of this original adventure, Tregroes Waffles moved his bakery to the small town of Llandysul for more suitable premises and better access. Since then, the small family business has grown in the UK and internationally, exporting its deliciously caramel-topped waffles, with the option of an irresistible chocolate topping.