Thanks to its economic boom of the 1990s, it is today a dynamic country, with a great cultural wealth, multi-ethnic, giving a young and optimistic image. 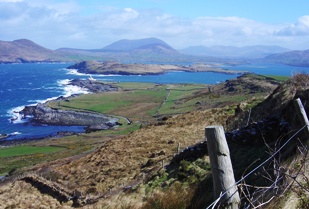 Ireland is called a green island because it is known as the land of 40 shades of green but all the remarkable natural sites of the island do not shine this emerald hue. For example, the Burren is an amazing area, stretching along the western coast of Ireland. This spectacular, unique landscape is a limestone plateau, interspersed with winding streams and lakes, excavated with labyrinthine caves and covered with rich flora.

The strange lunar landscape of the Giant Causeway (UNESCO World Heritage Site) is an impressive set of basaltic columns that break away from the cliffs of the Antrim Plateau and descend to the sea. The existence of similar rocks on Straffa Island, in the Scottish Hebrides, led the elders to believe that it was the work of giant Finn MacCool who wanted to build a Antrim’s Causeway road to Scotland, where a rival giant lived. 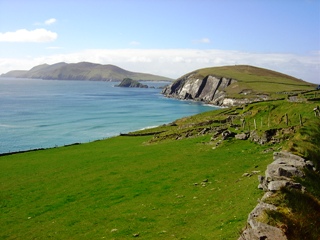 The Irish coast is home to a thousand and one treasures: steep cliffs, crystal clear waterways, pristine sandy beaches, fishing villages where you can enjoy some of the best seafood in the world. It is also a paradise for water sports enthusiasts.

With 344 km, the Shannon is one of the most beautiful rivers in Europe. Winding its way through spectacular natural sites, it springs in Shannon Pot, on Cuilcagh Mountain, in Cavan County, and flows into the Atlantic at Loop Head, in Clare County.

The islands of Ireland, far from the world, resound with a mythical beauty. They are a dream retreat for all those who aspire to be far away from everything. 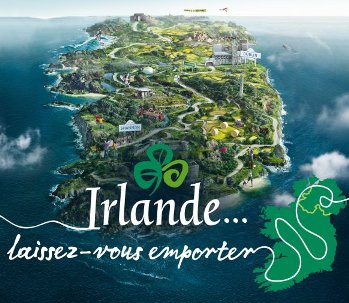 Irish people love traditions. St Patrick’s is a unique holiday on the green island that takes place every year. Traditional music and dance is practised from the smallest downtown pub to rural festivals. Pubs are the heart of cultural, social and musical life in Ireland. We go to the pub to listen to poetry readings, stamp his feet on a traditional tune, philosophize, exchange ideas or simply enjoy a pint of Guinness in front of a warm fire.

Irish culture is rooted in Celtic mythology. It has been forged over thousands of years. Irish history abounds in myths and legends, from the epic tales of the exploits of famous warriors and saints to the fabulous stories of fairies and elves.

The capital of the Republic of Ireland, Dublin, has incredible energy. Belfast, the capital of Northern Ireland, is known for its nightlife. It is also an intriguing destination with its turbulent past. 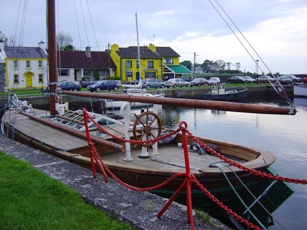 The trade mark of the three cities of the South/ South-East is very different from Dublin. Cork is a free electron, with a rich cultural heritage and its status as European Capital of Culture in 2005. Kilkenny and Waterford are also cities with a rich historical heritage.

Galway and Limerick, the two major cities on the west coast, are on the doorstep of wilderness. Galway is one of the prettiest cities in Ireland. Limerick, was built partly by the Vikings on the banks of the mighty River Shannon.

Four other towns are worth a visit in Northern Ireland. Londonderry, the only fully fortified city in the UK, is still very popular with visitors. Armagh is the former capital of the Ulster province. The smaller town of Newry offers a fine selection of institutional buildings. Finally, Lisburn is a charming little town, crossed by the Lagan River and home to elegant heritage sites such as the Lin Museum.

Visit the website of our partner, the Irish Tourist Office: