This summer, enjoy the Aperotime with our selection. Learn more >
Our CellarWhisky Whisky by countryScotlandIslayLagavulin 2001 Distillers Edition Pedro Ximenez 70cl 43° 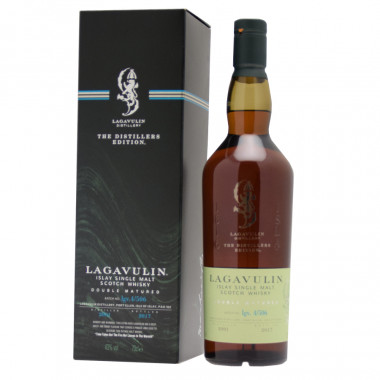 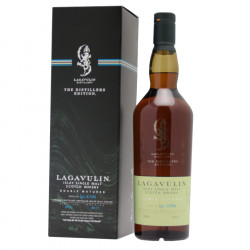 Lagavulin 2001 has been matured in Pedro Ximenez casks and bottled in 2017, accounting for its sweetness, and raisins and fig notes.

To craft the Distillers Edition Single Malts, each one of the Classic Malts distillery selects a few matured casks that will undergo a second maturation in Sherry, Port or Montilla wine casks. When reaching bottling age, each Classic Malt undergoes an Iberian Peninsula cask finish for another 6 months, and then becomes a Distillers Edition.

Intense, peaty, fruity, Lagavulin Distillers Edition benefits from a finish in Pedro Ximenez casks, a noble grape variety of Sherry that gives its name to a sweet and dark wine, processed from the grapes dried in the sun. This ageing conveys even more sweetness and smoothness to the spirit, with notes of raisins and figs. The powerful and complex character of Lagavulin and its distinctive smoky features match perfectly the sweetened accents of sun-dried grapes given by the casks.

For your information, our vintages regularly change. Lagavulin 2001 has been matured in Pedro Ximenez casks and bottled in 2017.

Built in 1816 on the South-East coast of Islay, not far from the ruins of Dunyvaig castle, old fortress of the Lord of the Isles, the Lagavulin distillery produces a Single Malt almost as legendary as the island where it was born.

Amongst Islay malts recognized for their peated and smoky character, Lagavulin is known for its complexity and depth: powerful, intensely peated, it is also rich, round and mellow. This double character is the key to appreciate the two new versions bottled at cask strength recently released by the distillery. The unique quality and style of Lagavulin whiskies ranks the distillery in the Classic Malts Selection. Created more than 20 years ago, this selection recognises Single Malts crafted in the tradition of iconic distilleries, and offers the most impressive whisky styles Scotland has to offer.

Nose: this spellbinding Lagavulin reveals an amazing pairing between an intensely peated Islay character and the lavish sweetness of Pedro-Ximenez.

Palate: a pronounced mouthfeel that begins with a soft hit glazed with peated and kelp flavours.

Finish: everlasting, even compared to Lagavulin 16 Years Old; mellow and round, rolling on waves of sandy dryness.

As an appetizer, Lagavulin and Roquefort cheese (blue cheese) confront each other on the taste arena but neither of them takes over. One of the greatest food pairings.