Blog Travel7 Places not to be missed in Wales

7 Places not to be missed in Wales

As Wales was honored this year at the Inter Celtic Festival in Lorient, August 3-12, Le Comptoir Irlandais invites you to discover this country through 7 unique places.

Wales is a place full of surprises, full of wonderful landscapes and historic sites, including three UNESCO World Heritage sites.

In this article, Le Comptoir Irlandais invites you to discover 7 must-see places not to be missed during your next visit to Wales.

Snowdonia is a mountain range in Gwynedd and Conwy, in north west Wales. There is a national park with an area of 2,170 km². In 1951, it became the first Welsh National Park. It is the second largest of the eleven national parks in the United Kingdom. The Grand Tumulus or Mount Snowdon (1,085 m above sea level) dominates the moutains. The park includes 100 lakes, 60 km of coastline and beaches, peat bogs and marshes and 90 mountain peaks. The region is full of landscapes to discover: waterfalls, rivers, lakes, forests, glacier valleys, lands... the perfect place for hikers.

- Mount Snowdon, 2nd highest peak in the United Kingdom. It is possible to go there by foot or by train from Llanberis which will take you to the highest point of the mountain.

- Swallow Falls, beautiful waterfalls in the middle of nowhere, great place to relax and let yourself be lulled by the sound of the current.

When visiting a country, it is necessary to go through its capital.

In addition to being a dynamic city and the country's capital, it is the largest Welsh city. Cardiff was founded by the Romans, then we find there Roman architecture and castles of the time.

The port is very important since the 1800s, Cardiff Bay is essential to visit when visiting the Welsh capital.

For the most enthusiastic sports fans, it is possible to visit the Millennium Stadium, a football and rugby stadium. This stadium hosted many Rugby World Cup XV matches in 1999, 2007 and 2015.

The Brecon Beacons Park is a British National Park covering an area of 1,347 km² including valleys, lakes, forests and peaks. It is one of the three main parks of Wales.

The park is an important tourist site offering many activities: hiking, climbing, horseback riding, orienteering, cycling, houseboat along the Monmouth Canal, the National Mine Museum and the old foundries located in Blaenavon (UNESCO World Heritage site) and Lake Llangorse.

This park is perfect to visit for nature lovers and sportsmen.

Pembrokeshire, or Pembroke County, is a county in south western Wales, on the shores of the Irish Sea.

There are many dolmens and megaliths dating from prehistory, but also stone crosses of Celtic Christianity.

Part of the county's shoreline forms the Pembrokeshire Coastal National Park, which stretches over 274 km. In addition to wild landscapes, many marine animals can be seen, such as porpoises, seals, dolphins and especially puffins, especially on the island of Skommer, which is a protected natural area.

You can not ignore a castle visit when you go to Wales.

Caernarfon Castle is located in the town of Caernarfon, North Wales. It was after the conquest of Wales by the English king Edward I at the end of the 13th century that the construction of the present castle began. It is a rather imposing fortress, conceived as a symbol of English authority.

The castle is now managed by the Welsh public body Cadw and is a major tourist attraction. It has been an UNESCO World Heritage Site since 1986, within the site "King Edward I's Fortified and Fortified Castles in the Former Principality of Gwynedd".

6 - The village of Portmeirion

Want to change air without changing country? The village of Portmeiron is a good compromise.

Portmeirion is a very colourful village, characterised by Italian architecture, built between 1925 and 1978 by architect and billionaire Sir Clough Williams-Ellis. It is located on the coast of Snowdonia, in Gwynedd, northwestern Wales.

This village is best known for having served as a set for the series The prisoner and two episodes of the series Danger Man.

The village looks like the Italian city Portofino, nevertheless Sir Clough Williams-Ellis denies the fact of having sought to reproduce it. He claims to have simply been inspired by the atmosphere of the Mediterranean cities, but he still recognises that this small town has had an influence on the construction of the architecture of Portmeirion.

This city with the original and unpronounceable name deserves a visit.

Llanfair­pwll­gwyn­gyll­go­gery­chwyrn­drobwll­llan­tysilio­gogo­goch is a village on the island of Anglesey in Wales. With 58 characters, this city name is the longest in Europe. The name of the city is also written: Llan-vire-pooll-guin-gill-go-ger-u-queern-drob-ooll-landus-ilio-gogo-goch, which indicates its correct pronunciation in English, and whose literal translation is "The church of Mary in the hollow of the white hazel near the fierce whirlpool and the church of Tysilio by the red cave". 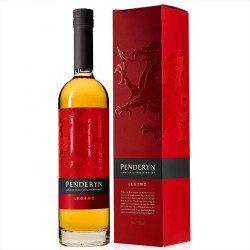 A standard expression of the distillery, Penderyn Legend has aged a few months in Madeira wine cask, with a first maturation in Evan Williams Bourbon barrels.
Wales
Penderyn Legend 70cl 41°
49,90 € 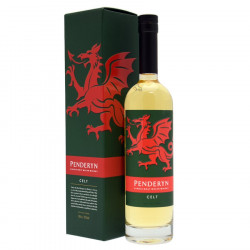 The Penderyn Celt is the new Single Malt of the distillery from Wales, matured in former peated quarter casks.
Wales
Penderyn Celt 70cl 41°
52,00 € 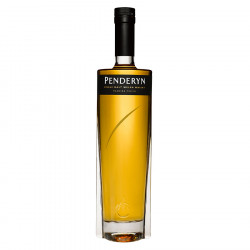 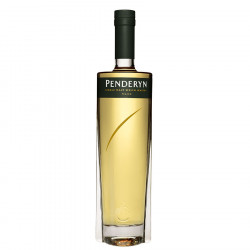 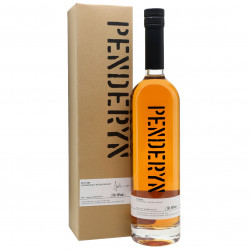