Culture , News
The famous Scottish poet, Robert Burns, was born in Ayrshire (South West Scotland) in 1759. He grew up on a farm and helped his family with labor but also received lessons from a preceptor who contributed to his literary education.

At 15, he began to write to forget the work and let his spirit fly to dreams of a better life. This is how he writes his first lines and develops his favorite themes: Scotland and women. His writings met with some success, he distinguished himself by his position of "poet-peasant", written in Scots language and enters the intellectual circles of Edinburgh where he settled in 1786.

He writes poems, revisits traditional songs and other texts about life in the countryside and politics. He is often considered a pioneer of Romanticism and, after his death, he became a source of inspiration for both the founders of liberalism and socialism.

Nicknamed the Bard of Ayrshire, he lived only 37 years but some of these lyric poems are known worldwide "O, my luv is like a red, red rose" and "Scots wha, hae" and for New Year's Day (Hogmanay), the song "Auld Lang Syne" is traditionally sung by all Scots.

And for more than 200 years, every January 25, the anniversary of his birth, Scots living in Scotland or abroad, celebrate Robert Burns with a dinner, where they celebrate haggis and whisky. The poet had even written an ode to Haggis, a traditional Scottish dish!

This party is happy and takes place well defined. Robert Burns' poems are recited there, we dance and we sing to the sound of bagpipes. The Burns dinner must always be filled with all the emotions of life.

There is a serious speech but with humor, nostalgia, merit, satire, confidences, subtlety, finesse, cheerfulness, sadness and all his emotions must be found in the meal lasts about 2 hours.
When the Haggis dish arrives, everyone gets up and applauds the famous dish. He raises his glass and toasts to the Haggis, then the dish is cut and served to each of the guests.

Nothing like a good Scottish whisky in honor of the poet to accompany the traditional haggis!

The Scottish Distillery Arran offers a whisky with the name of the famous Scottish poet. The Single Malt Arran Robert Burns is officially approved by the Burns World Federation, it is said that Burns held a high regard for this whisky. Despite its young age (about 6 years), this Single Malt shows a beautiful aromatic complexity. Since its first versions dating back to 1998, it has gained considerably in richness, complexity and coloUr. There is no doubt that aging will further affirm the finely wooded character of this single malt. 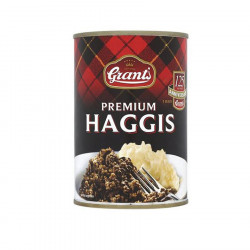 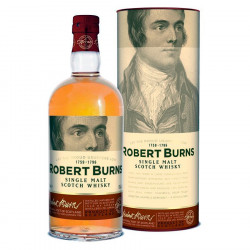