Smithwick's is the iconic Irish beer brand of the St. Francis Abbey brewery that also produces Kilkenny beer. It was created by John Smithwick in 1710 on the ruins of a 13th century abbey.

Originally, the brewery only produced red beers for use in Pressure Pubs. After a few years of production, Smithwick's has established itself as an excellent brewery, producing thousands of barrels of beer throughout Ireland.

Built on the ruins of an underground Franciscan abbey, St. Francis Abbey, the brewery is the oldest in the country. Smithwick's is the largest beer producer in Ireland.

The "w" is not pronounced. In Ireland, it is generally pronounced in the following ways (due in large part to the different Irish accents and dialects): "Smithicks" - "Smitticks" - "Schmiddicks" - "Smeth-icks".

The history of the brewery

Shortly after the Smithwick family arrived in Kilkenny, John entered the brewing industry with Richard Cole on land he had leased to the Duke of Ormond in 1705.

Edmond Smithwick, son of John Smithwick already had the brewery and ambition was in his blood. At the age of 27, he bought the brewery freehold and, for the first time, the name of the Smithwick family is proudly hanging over the door. He became a natural businessman and focused on discovering new markets.

The inhabitants of the city accorded Edmond the respect he deserved and voted him four times the mayor of Kilkenny. When the famine struck in 1847, its brewing rival Richard Sullivan put aside the competition to set up a soup kitchen to feed the needy. He generously contributed to the construction of St. Mary's Cathedral and supported the emancipation of Catholics, a cause close to his heart. Edmond became a great friend of the Irish liberator Daniel O'Connell, who later became the godfather of his son, Daniel O'Connell Smithwick.

Edmond started a tradition of always employing the most qualified people. Expert brewers brought scientific and technical innovations, and the result gave Smithwick beers unmatched quality.
At the end of the 1800s, export sales began to fall, but the Smithwick family found a solution: it increased the production of malt, began selling mineral water and even delivered butter with beer. The times were tough but the company survived and in 1892 Smithwick's won first prize at the Dublin Rotunda Exhibition, organized by brewers and distillers.

In 1930, Walter son of James Smithwick took control of the brewery. He realized that distribution was the key to success and started to motivate sales agents across Ireland. He also bought gas trucks to serve customers in the far west of Ireland. On October 8th 1937, Smithwick's number 1 beer won first prize at the London Bottled Beer Competition.

After the war, business was good, then in 1947, the melting snow caused a major flood submerging the entire brewery. Fortunately, all the valuable recipes and technical reports have been stored safely in a dry place. The summer that followed was the worst of all time. Heavy rains caused a national emergency, threatening cereal crops. The disaster was averted and the country was saved from a minor famine and a major lack of good beer.

In 1964, Guinness & Co, one of Smithwick's oldest customers in the malting sector, acquired a majority share of the market. Peter Smithwick took his reins. His newfound determination and inventiveness, combined with the expertise of the Guinness sales force, has been one of the greatest success stories of all the beers of this century. The Guinness Group now owns the Smithwick's brand.

Smithwick's Red Ale is the Smithwick's classic. This Red Ale amber beer is one of the best known, most appreciated and oldest Irish beers since it was created in 1710.
Smithwick's Blonde Ale is a "Blonde Brewmaster Edition" beer brewed with "Polaris" hops carefully selected for its exceptional qualities. It brings freshness and subtle fruity aromas with malty flavours.
Smithwick's Pale Ale is a creamy mousse beer with hints of citrus and wildflowers. Its herbaceous notes make all the originality of this golden beer. This amber beer has a body and a pronounced taste. It is brewed with artisanal methods from hops "Amarillo".
For Irish beer lovers, Smithwick's beers boxes are available at the Comptoir Irlandais:
A Smithwick's composition containing 6 Smithwick's beers, the iconic Irish beer brand of the St. Francis Abbey brewery. This box allows to discover the Blonde Ale as well as the Pale Ale and the Red Ale.
A Smithwick's - Guinness composition with 5 different beers from the famous Guinness brewery and 5 Smithwick's beers. To taste these Irish beers as it should, the box also contains a Guinness pint and a Smithwick's pint. 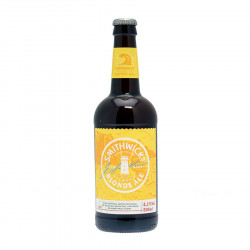 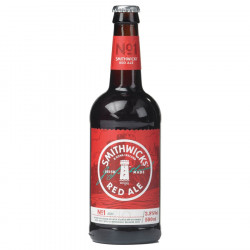