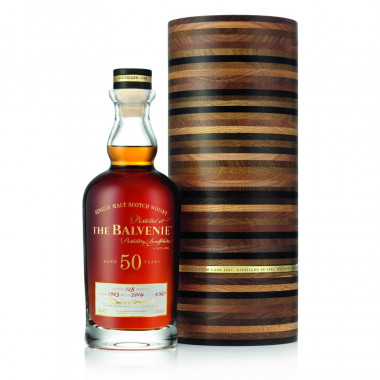 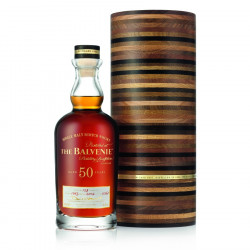 The Balvenie 50 Years-Old is presented by Le Comptoir Irlandais, it's an exeptionnal edition with only four bottles available in France. Both versions of this rareness offers a single character.

Here are two versions of this expression.

The Balvenie 50 Years-Old was distilled in 1963, has aged for a long time in two hogshead european barrels, in Dufftown distillery. These two casks patienlty aged in the best conditions during 50 years. Bavenie's 50 Years-Old °4567 cask 45.4° caught a deep reddish color, whereas n°4570 cask 45.9° has a golden color.

For cellar master David Steward, this Single Malt is a discovery after such a longue aging process. The aging process relies on chemical interactions between the wood, the distillate and its environment, David Stewart says "it's an honnor to discover after half a century how this unique 50 years-old cask turns out to be an exeptionnal malt".

The Balvenie 50 Years-Old n°4567 reveals exeptionnal notes with dark fruits (cherry and blackberry), an explosion of cinnamon and spices, ginger and hot pepper. A unique softness qualifies this exclusive malt.

The Balvenie 50 Years-Old offers a range of finely malted flavors, reminding honey, brown suggar and vanilla, raised with a hint of spices. Very soft and complex notes stretching to infinity.

Every 50 Years-Old Balvenie bottle is made in blown glass, and presented in a wooden case custom made by a scottish maker, Sam Chinnery. 49 wooden rings, originate from 7 trees of the Balvenie's distillery (Galloway Ash, Borders Oak, Lothian Walnut, Cherry and Yew, Fife Beech et Banffshire Elm). A closing copper tab reminds the distillery's premises, the stills and distillery's safe.

Palate: an Aix calisson hinted by vanilla, a bit of caramel, balanced with a little spices.