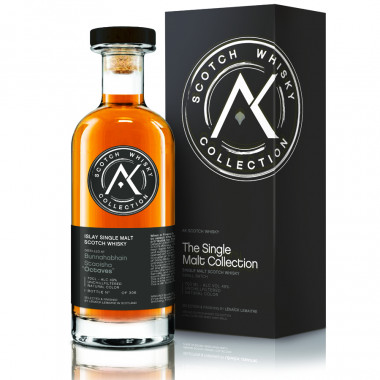 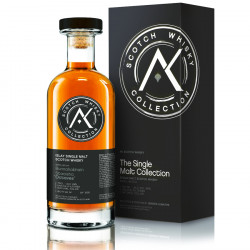 A Bunnahabhain expression of the AK distillery in power and peat that observes a perfectly controlled balance.

Bunnahabhain! A cult name that evokes beautiful things in the eyes of amateurs!

"Staoisha" is usually used by independent bottlers for "heavily peated".

This young Bunnahabhain very peaty, powerful and distilled in 2013 demanded lots of work during its young life to bring itself roundness, maturity and balance!

It first spent 6 years of its life in two 250L barrels. These two barrels were then separated into two "cuvées". This second "cuvée", called "Octaves" is distributed in small casks of bourbon, bringing roundness and softness on rather pastry hints with very peaty notes in the background.

A very classy whisky where the peat of Islay expresses itself in gourmet way!

When a Breton whisky producer also wants to choose the best of Scotland, in homage to his "opposite cousins ​"...

Lénaïck LEMAITRE first created "Naguelann", a whisky 100% made in Brittany near Saint-Malo in France, by developing a range of blending, refining and distilling pure malts.

In the meantime, with two friends and associates on Naguelann, he has set up a Whisky bar / shop in the historic center of Saint-Malo. They called it "ArKoad", a Breton translation for "the forest".

To have more singularity in the choice of whisky offered, Lénaïck decided to cross the sea and choose his own Scottish barrels, to bottle them with his personal touch, its blends and its finishes.

It's the story of a passionate guy

It's the story of a Celtic culture

The strength of these whiskies lies in Lenaïck’s experience. In fact, he touches all trades in the "Whisky World" universe: tasting in his Malouin bar, distillation in his Breton distillery, independent bottling and woodworking in his cellar in Scotland. Add to that a passion for "good product" and the best of Breton and French terroir ... it gives you real taste nuggets in a purely fun spirit.

Lenaïck, with AK, is also the defender of an idea which is progressing: to make the tasting as accessible and as fun as possible. This obviously goes through natural colour and unfiltered traffic.

Another technique is involved in bottling: the search for the "optimal degree". He searches for each of his whiskies, the degree of alcohol or the aromatic balance and texture is at its peak.

His whisky is not reduced to 40 ° and is not often bottled in casks. The alcohol level is often between 45 ° and 50 °. Lenaïck, drop by drop, during long sessions of analysis of his whiskies, reduces the alcohol level until the "peak" of equilibrium. One more process that proves the experience of this passionate and the enormous work carried out around his creations.

Nose: clean peat and ashy, softened by new wood tannins. Gradually she tames and would almost be forgotten.

Palate: a Single Malt that emphasizes power, 49° to find the middle between a barrel and a Mistery. The octave/peat duel offers very complex aromas around the almond, honey and tonka bean...