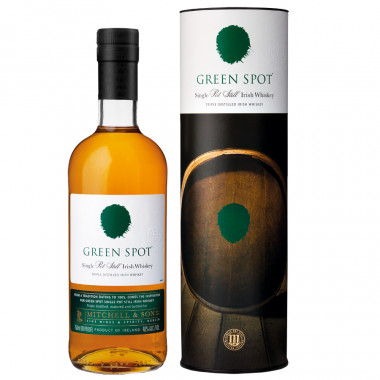 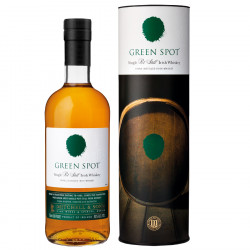 Triple-distilled, this whiskey is highly sought after by whiskey connoisseurs.

The "Green Spot" derives from the marking developed by the Mitchell family, first brand owners, on the casks of various ages, with colour paint. It was initially a blue spot, then a red and even a yellow one, but the green spot stole the limelight and stands today as a full brand, Green Spot.

Highly sought after by Irish whiskey connoisseurs, Green Spot is a Single Pot Still whiskey made from a triple-distillation and is a perfect blend of malted barley (40%) and non malted barley (60%)(Pure pot still whiskey) that aged mainly in Sherry casks and also Bourbon barrels. All the whiskeys composing Green Spot are aged 7 to 10 years.

This maturation gives Green Spot its elegance and depth. With a burnished gold colour, it is very spicy, woody but also fruity with vanilla notes.

Single Pot Still whiskey is unique to Ireland and specifically to Midleton distillery, such as Single Malt is Scotland's hallmark. We may consider this spirit the essence of Irish whiskey. Made from a equal percentage of malted and non malted barley following the tradition of Pure pot still whiskeys, then triple-distilled in traditional copper stills, for a creamy sensation and sophisticated aromas.

This whiskey may be enjoyed as aperitive or digestive.

Nose: fine and balanced, it is marked by malted barley and fresh walnut. Once aerated, it develops into white-fleshed ripe fruit (peach).

Palate: a lively and smooth attack, it develops into red fruits (blackcurrants), peach and vanilla.

Finish: mentholated and creamy, it unveils notes of almond and ripe fruit.