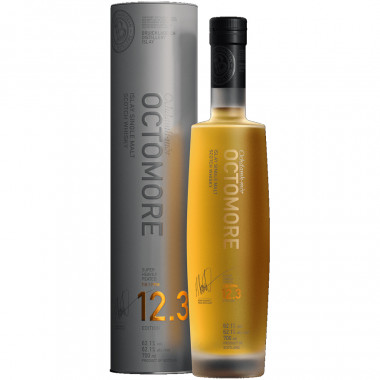 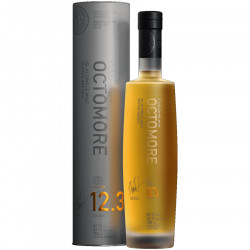 Octomore 12.3 is a vintage Single Malt, 12th edition and 3rd variation of the famous peaty series from the Bruichladdich distillery.

Octomore 12.3 is a vintage Single Malt, 12th edition and 3rd variation of the famous peaty series from the Bruichladdich distillery.

The Single Malt has slowly borrowed for five years from the wood of the barrels its marine notes of salty citrus fruits, the result of the place where barley is grown and the proximity of the distillery's warehouses to the sea. Pedro Ximenez's barrels provide notes of sweet dried fruit that highlight the rich dry peat of Octomore.

Nose: light sherry notes of fig, raisin and dates with charcoal, boot polish smoky notes set the tone for this dram. Light, fresh citrus honey notes from the spirit, intense floral notes of honeysuckle and orange blossom burst from the glass and then dark toffee, milk chocolate and vanilla from the oak add depth to the aromas. Smoked grain, seaweed, linseed oil and tobacco come as the whisky continues to open.