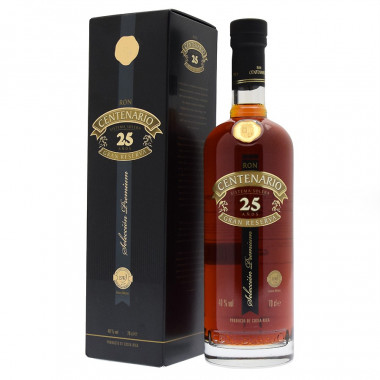 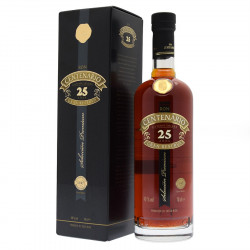 Centenario rums are leaders in Costa Rica, the sugar cane has grown in volcanic soil, a meticulous blending to developp its different properties.

It has aged with the Solera process for 25 years, this premier selection will please good rum amateurs.

The solera maturing method consist in mixing rums with different ages and to mature then in barrels in a position of waterfall.

Fanal produces the Cacique Guaro, a typical alcohol from Costa Rica, derived from cane sugar and considered as a variety of sweet rum (about 30% of alcohol).

Since 1985, Fanal develop and sell the Centenario, opposite to the Cacique Guaro, is destinated to the exportation. The molasses is produced locally, from two varieties of sugar cane called castilla and criolla.

The distillation is carried out using two types of stills, in columns and continuously, for light distillates with a grading of 96% and pot stills for eau-de-vie more complex spirits with 80%.

Result of a long and patient process of elaboration, the rum can be aged according to the Solera, spanish method, in order to standardize the aging of the rum.

More the Solera has levels, this overflowing filling from the top floor, more the older the spirits are drawn.

Nose: offers a booming of fruity aromas, with woody and vanilla notes.