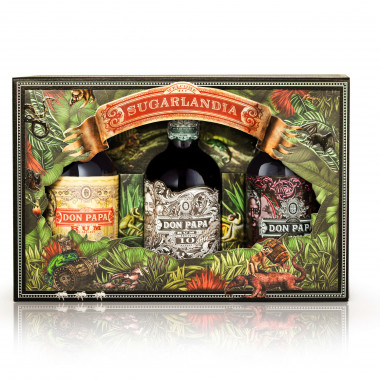 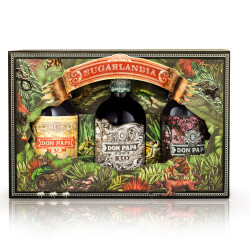 This Don Papa box contains 3 emblematic rums of the brand presented in 20cl bottles: the 7 years old, the 10 years old and the Sherry Cask.

Let yourself be transported to the heart of the Philippines with this Don Papa box which features 3 emblematic rums of the brand presented in 20cl bottles:

- the 7 years old, the most famous of the brand, made from the best molasses from the island of Negros,

- Sherry Cask, first aged in ex-Bourbon casks then in casks that have contained four types of sherry, for a unique result.

This box will appeal to both fans of the brand and those who would like to discover it through its emblematic rums.

Nose: very fruity. Dominated by notes of mandarin and citrus zest, topped with orchard fruits and a touch of mango. A very balanced nose of spices and the presence of vanilla and cinnamon.

Palate: full-bodied with notes of ripe tangerines, brown sugar, vanilla cream, with a hint of fresh ginger and lemon zest.

Finish: sweet notes of persistent fruit combine with warm woody spices and a delicate and rich sweetness of black honey.

Nose: intense and strong with notes of dried fruits (sultanas) and cocoa.

Palate: rich and silky with a touch of spice and oak.

Finish: long and smooth with notes of cocoa and vanilla.

Palate: powerful and delicate at the same time, with notes of plums, figs and nuts.

Finish: long and velvety, it envelops the palate.