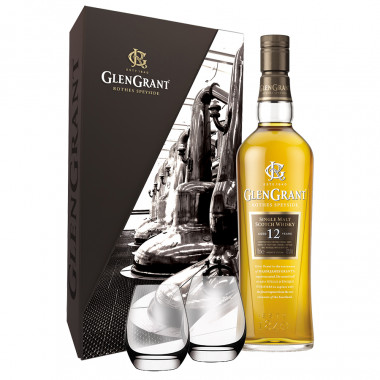 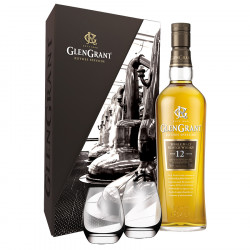 An elegant Single Malt from the Speyside region of Scotland, 12-year-old Glen Grant has aged 12 years in first-fill Bourbon casks. The whisky has deliciously floral notes that blend well with the orchard fruit flavours typical of Glen Grant.

To discover in a gift box with two tasting glasses.

In 1820, James Grant was one of the 700 men of the Clan who took part of the “Raid on Elgin”, the last revolt of the Scottish history… In 1840, the John and James Grant Brothers filed for a distilling license. With the sea and Garmouth harbour nearby, the Spey river flowing at their feet and the rich barley fields, all of the basic ingredients of a pure malt whisky were reunited. As Grant helped building the first northern train line of the United Kingdom, one of the locomotives of the Lossimouth-Elgin-Rothes line was named Glen Grant in 1851.

In 1872, the founders of the distillery had passed away. The young James “The Major” Grant, born in 1847, had always shown great interest for the distillery. He inherited both the business and the name “Glen Grant” from his uncle John Grant, and was then able to rise to the challenge. Numerous tales surround the Major. He was an inventor, innovator and legendary traveler, fascinated by new ideas and first man of the Highlands to own a car! Glen Grant was the first distillery to have electric lighting. He created the slender stills and purifiers that are today hallmark of the Glen Grant distillery. Glen Grant produces a clear, fresh and malted whisky.

In 1972, the Glenlivet and Glen Grant Distilleries Ltd merged with Hill, Thomson & Co Ltd, and Longmorn Distilleries Ltd to form the Glenlivet Distillers Ltd. The original shares of the family were kept, with two major external shareholders: Courage Lt (Brewing Company) and Suntory Ltd, a Japanese distiller. In 2006, the Campari Group acquires Glen Grant, its only whisky. Today, Glen Grant is still one of the best-selling malt worldwide. The story of Glen Grant will keep on going as long as Speyside men with the mandatory skills and wit will maintain the Grant’s family standards and traditions.

In Scotland, music and Scotch are always combined; to such extent that the famous fiddler Scott Skinner wrote a violin song celebrating the Glen Grant distillery and its famous whisky. The wild Strathspey dance, called “Glen Grant”, was composed on April 24, 1909.

Nose: rich with a beautiful development of aromas of honey, pear and apple with hints of almonds and lemon.

Palate: delicate and round with caramel, vanilla and crisp apple pie.