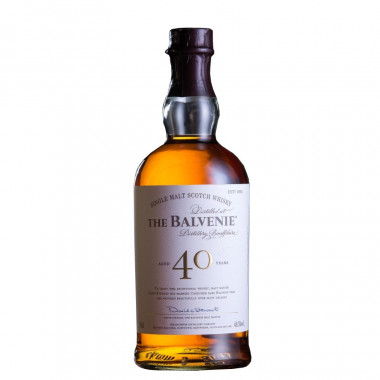 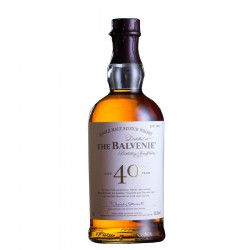 The Balvenie Forty, a 40 Year-Old whiskey, is limited to 150 bottles in this fourth batch.

In order to create the fourth batch, a unique batch of 150 bottles of The Balvenie 40 Year-Old whisky, Malt Master David Stewart creatively combined small quantities of The Balvenie whisky aged in four refill hogsheads and three Sherry casks, aged for at least 40 years.

Nose: rich oaky notes over a baked apple and fruit compote backdrop, with soft leather. Adding a dash of water unlocks sweet and fruity notes with a hint of vanilla.

Palate: the silky texture overflows with sweetness and smoothness with spicy notes of cloves, cinnamon and ginger. A wonderful mouthfeel with flavoursome oak, and touches of mild dark chocolate, roasted almonds and the fruity notes of Sherry.