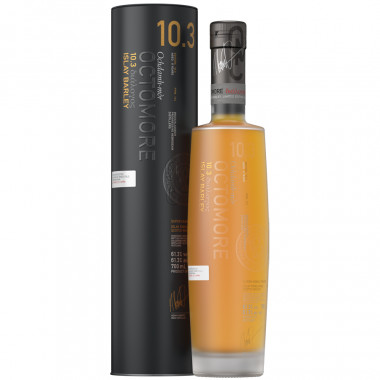 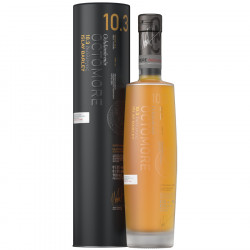 This new edition Octomore 10.3 of the 2019 series named Ochdamh-mòr is interesting, mirrored with the 10.1 edition.

This new edition Octomore 10.3 of the 2019 series named Ochdamh-mòr is interesting.

Distilled in 2013 from a Concerto barley harvest in 2012 on the distillery's farm, the Octomore 10.3 uses the wet and wild conditions of the west coast to combine an exploration of the Islay terroir with stratospheric smoke characteristic of Octomore.

For the first time, the 10.3 is matured for six years, but exclusively in Bourbon barrels from Jim Beam, Heaven Hill, Buffalo Trace and Jack Daniel's distilleries.

These high quality casks have gently infused the spirit of this Single Malt Octomore in the 16th warehouse, next to the 10.1 edition.

The components of these two editions are also very similar. The character of each remains unique. This difference is attributed to the place of harvest of barley, different for these two versions.

Octomore 10.3 has 114 PPM*. It develops the marine freshness of Islay. The whisky is raw cask, without cold filtration and without dye.

Only 24,000 bottles are available for this limited edition.

Nose: earthy peat smoke, dry and a little medicinal, drops of lemon and thyme, then marine notes and shells, as well as vanilla and fudge.

Palate: a feeling of salt on the lips, hints of honey and lemon that develop in the mouth, then the peat infiltrates with the woody oak and the heat of the smoke. The deeper flavors of whiskey, pear and gooseberry are richer in the continuity of the tasting.

Finish: sweet, first with chocolate, then bitter notes of rubber smoke and spices towards the end.