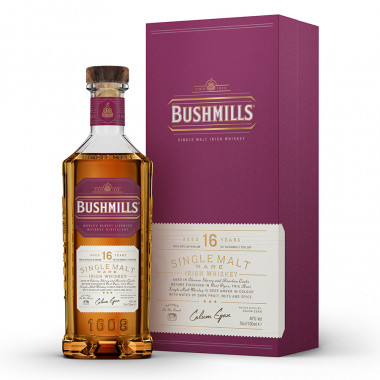 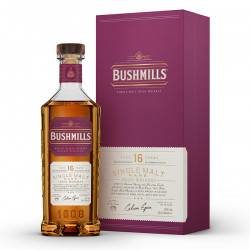 One of the most refined and accomplished whiskeys of The Old Bushmills distillery, with an exceptional richness and sophistication brought by the wood finish.

Crafting Bushmills 16 Year Old Single Malt whiskey requires a lot of patience and passion. This whiskey originates from the combination of two whiskies that aged for 15 and 16 years, the first one in American oak Bourbon barrels and European oak Oloroso Sherry Butts, then blended and aged for a year more in Port pipes for a perfect finish.

It is one of the most accomplished and refined whiskeys of The Old Bushmills distillery with an exceptional richness and sophistication brought by the wood finish.

Palate: sophisticated and fruity. Cherry aromas brought by the maturation in Port pipes develop into sweet flavours of almonds, honey and praline.

You don't need much to taste perfectly your 16 Year Old Bushmills Single Malt:

Start your tasting with neat 16 Year Old Bushmills and discover its aromas, then add a drop of water and release the fruity and spicy flavours of the whiskey. You may swap water with ice to refresh your drink.