Sales up to 50% off. 2nd markdown : extra 10% off on textile items already on sale! Discover >
Our CellarWhisky Whisky by countryIrelandKnappogue Castle 12 Years Old 70cl 40° 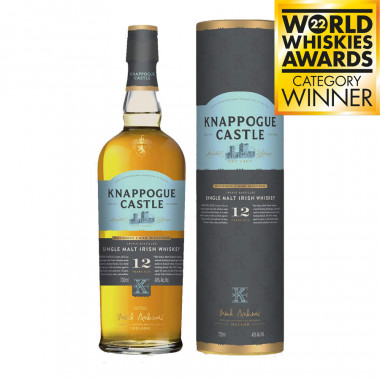 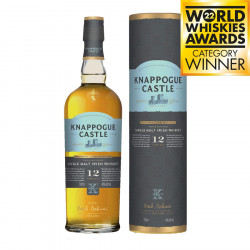 An harmonious malt that lives up to the tradition of quality built up by Knappogue Castle.

For the first time, Knappogue Castle releases its 12 Year-Old Irish Single Malt. This whiskey replaces the 1995 Vintage Knappogue Castle. With this new edition, the distillery wishes to make light on the age of its whiskey:

"We noticed that some of customers were not aware how long Knappogue Castle Single Malt was aged. But this work is essential to the subtlety of our products", says Mark Andrews, son of the brand's founder. "We wish to be perfectly clear about the age of our Knappogue Castle Single Malt. From now on, it won't be necessary to calculate the age of the product as we boldly state it on the front label. The age of our whiskey is something we are proud of, along with the fact that we're not adding colouring, says Mr Andrews. "Our standard range will be the 12 Year-Old whiskey but we will keep on bottling rare and unique whiskies that will most probably bear a vintage label".

12 year-old Knappogue Castle is a round, bright, well balanced whiskey with mildy spicy and fruity notes, for a refined overall with great subtlety. A high quality Irish whiskey selected and bottled at perfect maturity, that might be one of the best vintages of Knappogue Castle today.

For centuries, fine whisky has been produced in Ireland. The word “whiskey” comes from ancient Gaelic “uisce beatha”, meaning “water of life”.

In the 1960’s, Mark Edwin Andrews, an American with strong ties to Ireland, purchased barrels of Irish whiskey. He left them to age before bottling them under the Knappogue label, the name of his castle originally built by the MacNamara clan in County Clare, 1467, in order to lead the rebellion against the Norman invasion.

Knappogue Castle keeps the tradition alive as initiated by the Andrews and produces exceptional Single Malts. Mark Edwin Andrews and his wife Lavone Dickensheets Andrews, a Texas architect, embarked on a journey to return the castle to its past grandeur and glory, and then Mark Edwin Andrews fell in love with the art of bottling and built the quality Knappogue Castle brand.

Nose: the first nose is richly filled with biscuity, malted and morning cereals flavours. After a while in the glass, air unlocks peppery, vegetal and spicy notes.

Winner of the 12 years and under Irish Single Malt category, World Whiskies Awards 2022.