Sales | Up to 50% off! >
Our CellarWhisky Whisky by countryScotlandSpeysideKnockando 15 Years Old Richly Matured 70cl 43° 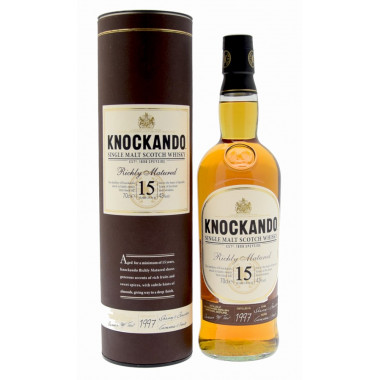 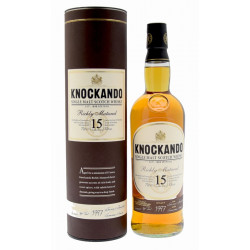 Knockando 15 Years Old has been matured in both Bourbon and Sherry casks and develops rich flavours of fruits and almonds.

The art of maturation is fully mastered at Knockando distillery and this 15 year-old single malt is the perfect example. It offers rich and generous fruity notes, as it has been aged in Sherry and Bourbon casks to be infused with their specific flavours. The Sherry casks maturation imparts an intense fruity flavour and Bourbon develops subtle almond notes.

Founded in 1898 by John Thompson, the Knockando distillery sits on the Spey banks, the river from which Speyside takes its name.

This region of Scotland is known for its refined malt whiskies. The distillery’s name derives from Gaelic “Cnoc an Dhu”, translating as “small black mountain” in English. The Knockando’s tradition is to bottle whisky from a single vintage, or “season”. This harks back to the time when distillation was a seasonal activity, only done in autumn and winter months. Today, Knockando is distilled all year-round, but is still bottled “one season at a time” and each bottle proudly bears its year of distillation. The unique character of Knockando ranks the distillery in the Classic Malts Selection. Created more than 20 years ago, this selection recognises Single Malts crafted in the tradition of iconic distilleries, and offers the most impressive whisky styles Scotland has to offer.