Sales up to 50% off. 2nd markdown : extra 10% off on textile items already on sale! Discover >
Our CellarWhisky Whisky by countryScotlandSpeysideBalvenie 50 Years Old 70cl 42° Vintage 1967 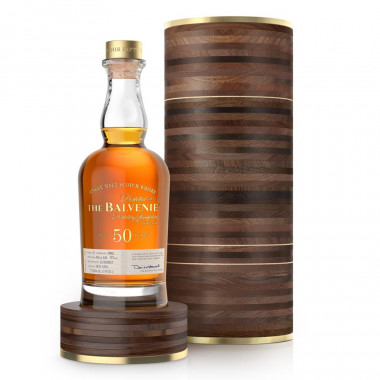 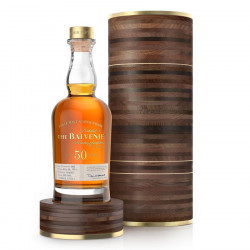 This exceptional edition of the 50-year-old Balvenie comes from the combination of 4 exceptional whiskies of the 1967 vintage.

The Balvenie 50 years old is a Single Malt created from the marriage of five exceptional 50-year-old whiskies.

David Stewart, Master Distiller for more than 55 years, selected them from the rarest and oldest barrels of the distillery. He explains how he achieved this exceptional result: "I continue to discover and learn new things.This new expression of 50 years has required me months of patience to marry the best whiskies at age, taste and the degree that are so exceptional".

This chart is showing the origin of 4 casks that make this edition Mariage 0197 :

An exceptional packaging: each bottle of the Balvenie Fifty: Wedding 0197 is presented in a beautiful wooden tube composed of 50 layers, 48 of walnut and two of brass, handcrafted by the Scottish artisan Sam Chinnery, in his workshop at Bruntlands Farm near Elgin, Scotland. The presentation also includes a certificate in brass engraved and a bottle glorifier, inscribed with the tasting notes of each cask constituting and the taste, palette and finishing of the final wedding. The carafes for Marriage 0197 were hand-blown from 100% lead-free crystal by Brodie Nairn and his team of skilled craftsmen at Glasstorm, based in Tain, Scotland. The custom design of the glass carafe is an elegant reinterpretation of the classic shape of the Balvenie bottle, which itself reflects the silhouette of the distillery’s copper stills.

Palate: a large and bold character with malty sweetness and an explosion of spices, notes of honey and dark chocolate balance oak tannins.

Finish: a rich and spicy palate, coated with a delicious oaky sweetness.