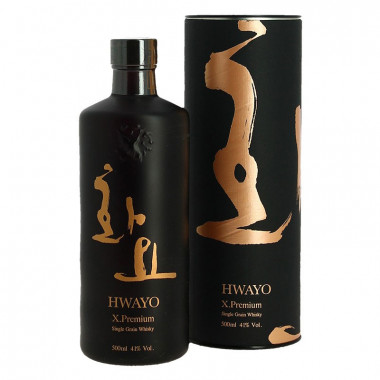 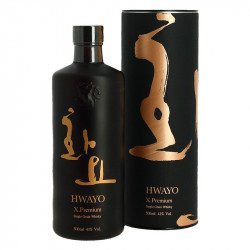 Hwayo X Premium is the only Korean whisky available in France.

"HWA" means fire and "YO" means a noble object. By assembling these two symbols, this whiskey honours more than 700 years of tradition of distilling soju (spirits originating in Korea).

This Single Grain is produced exclusively from rice. Its manufacture is based on a philosophy of using noble natural products. The rock water used comes from the province of Yeoju, known to be pure and crystalline. The rice grown in South Korea is a Japonica-type short rice variety used in the traditional making of soju.

This Single Grain has aged 5 years in American oak barrels and then finished 6 months in ongi, giving it a delicate fragrance and intense aromas.

The Hwayo distillery is thus named in reference to its philosophy, "Hwa" for the fire and "Yo" for the noble object, it indeed wishes to develop a noble product from the resources given by nature.

It is the KwangJuyo group, specialist in ceramic crafts, who decided in 2005 to launch under the name Hwayo its range of soju, a very popular alcohol in South Korea.

The group decided a year later to launch a new concept in the world of whisky, to create a whisky made from rice.

The production of its whisky is inspired by traditional methods of making sonju. Hwayo is keen to use the natural resources of Korea, so the rice used is cultivated in the country, moreover the water is drawn 150m deep in a natural rock of the province of Yeoju.

Nose: Rich and elegant with notes of fruit and rice.

Taste: Sweet and balanced with hints of toffee and honey.

Overall: Delicate and intense with notes of vanilla, cereals and flowers.