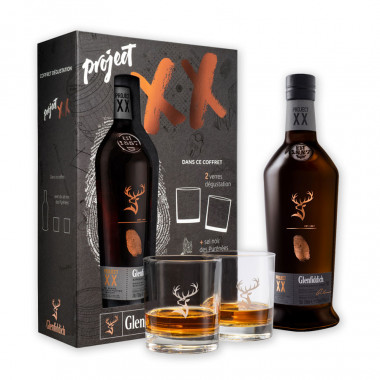 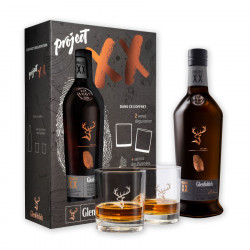 Find the Single Malt Glenfiddich Project XX, an exciting whisky in a tasting case with two glasses of whisky and a bag of black salt, for an original experience.

Enjoy an original tasting experience with this gift box including the Single Malt Glenfiddich Project XX, two glasses of whisky and a bag of black salt that reveals the richness of the aromas of this whisky.

Glenfiddich Project XX is an original creation of the distillery imagined with 20 creators and experts in the world of whisky who had 'carte blanche' to develop an extraordinary and unexpected whisky, the result is fascinating.

Each expert was able to choose a barrel of Glenfiddich from the cellars of the distillery. This Single Malt is the result of the assembly of 20 Glenfiddich barrels. Selected casks include malts aged in Port casks, Sherry casks and first fill Bourbon casks.

The steep-sided valley where the Fiddich River flows, gave its name to the best-selling malt in the world.

The distillery is located on the banks of the river in Dufftown. Fiddich translates as “stag” from Gaelic and here’s why the animal is now the emblem of the distillery. This famous distillery has been established in 1886 and is still in the hands of the same family (as a limited company). In 1963, the company bet on spreading the Single Malt outside the borders of Scotland – which was considered as pure folly by blended scotch producers, deeming Single Malts as too intense, too richly aromatic or too complex for non-Scots drinkers. Glenfiddich remained traditional and is still heating its small stills with coal and ageing spirit in casks. The whiskies, aged in different woods, are blended in the Glenfiddich cellars, and bottled “at the chateau”! In fact, the distillery overlooks the complete bottling process. Glenfiddich is proud to own the most rewarded Single malt whisky range in the world.

Nose: at first fruity summer fruits and ripe pears with a soft perfume of apple tree flower. A beautiful balance between woody oak tree notes, rich and creamy vanilla, candy cane and a hint of liquorice and spices.

Palate: very refined and balanced. It's a deep and mellow whisky, where the smoothness of vanilla is filled out with roasted almonds, cinnamon and a hint of fresh tannin.