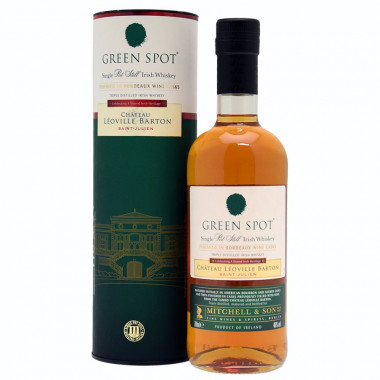 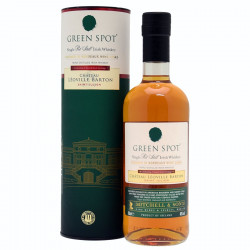 A special edition of Green Spot, this was aged initially in a combination of bourbon- and Oloroso-sherry casks before being finished for up to two years in casks from famed Bordeaux winery Château Léoville Barton.

Green Spot Château Léoville Barton is the first ever Single Pot Still Irish Whiskey with a maturation finished in Bordeaux wine cask. This special edition adds an innovative, new dimension to the classic Green Spot expression, which is already renowned among whiskey lovers for its exceptional quality.

Set in the heart of the Saint Julien appellation in Bordeaux, one of the most revered winemaking regions in the world, Léoville Barton is a grand cru Château renowned for producing world class wine. Léoville Barton is overseen today by Anthony and Lilian Barton, direct descendants of Thomas Barton, a ‘Wine Geese’ winemaker who founded a wine merchant company in 1725, after migrating from his native Ireland.

Initially matured in a traditional mix of ex-Oloroso sherry, new Bourbon and ex-Bourbon barrels, the whiskeys were then transferred into the ex-Bordeaux wine casks for between 12 and 24 months. This imparted distinctive, floral flavours of varying intensity, resulting in a perfectly balanced whiskey.

Finish: long and quite dry with cereal and plenty more spiciness!