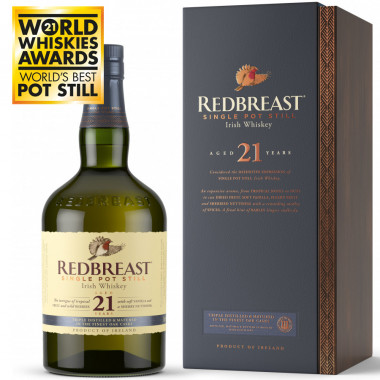 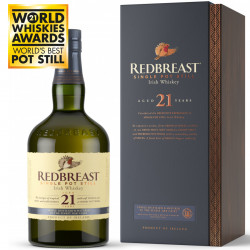 The oldest expression from Redbreast so far, this is a combination of malted and unmalted barley matured in a mix of bourbon barrels and first-fill Oloroso casks, resulting in a rich and complex whiskey.

Redbreast 21 year old is the finest representation of the signature Redbreast sherry style - it is the oldest and richest expression of Redbreast ever produced. Furthermore, the 21-year ageing process introduces new levels of depth, flavour and taste to create an inherently complex and ultimately, rewarding whiskey.

It is made from a mash of malted and unmalted barley, triple distilled in copper pot stills, and finally, matured in a combination of American bourbon barrels and first fill Spanish Oloroso sherry butts.

Finish: lingers, seemingly forever, to oak and pot still spices and then the final bow from the barley – where it all begins.