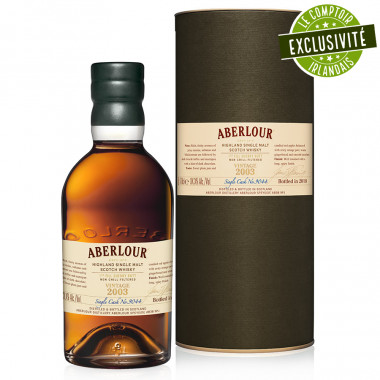 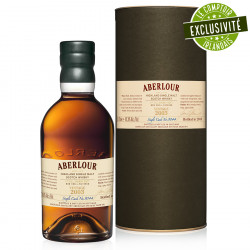 Exclusively available at Le Comptoir Irlandais with only 636 bottles.

The Aberlour distillery with century-old know-how recognised since the creation of the distillery by James Fleming in 1879, has dedicated an exclusive Single Cask to Le Comptoir Irlandais.

Aberlour obtains barley from a distance of 25 km around the distillery and uses the crystal clear waters of Lour (river) for the creation of these exceptional whiskies.

In 2018, Le Comptoir Irlandais experts have selected this Cask #9044 in Aberlour cellars for its quality and exceptional profile. This is a Sherry Butt, a noble barrel with a capacity of 500L.

It was home to Oloroso sherry for many years before hosting Aberlour whisky with notes of dried fruits and spices. These aromas are even more present in this Single Cask because it is a first filling drum, which ensures a remarkable taste profile.

Le Comptoir Irlandais has chosen to bottle without cold filtration to its natural degree of 58.9° for a greater restitution of aromas.

Nose: rich, fruity aromas of juicy raisins, sultanas and blackcurrant are followed by dark treacle toffee and marzipan with a hint of dark chocolate.