Sales up to 50% off. 2nd markdown : extra 10% off on textile items already on sale! Discover >
Our CellarArchivesTeeling Revival V 12 Years Old 70cl 46° 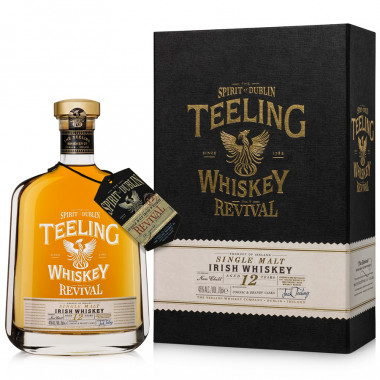 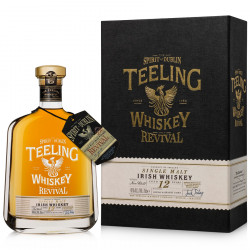 The fifth and final edition of the Revival, Teeling Single Malt Revival V celebrates the creation of the Teeling Distillery. Raised in Bourbon casks, this 12-year-old Single Malt has enjoyed a finish in Cognac and Brandy casks.

Ultimate and fifth edition Revival, this Single Malt celebrates more than ever the opening of this legendary Dublin distillery originally created in 1782 by Walter Teeling. It had to shut down for economic reasons in 1976.

A true renaissance that the Teeling brothers have been yearning for since 2014 and the installation of their distillery in Dublin, not far from the original location of the distillery of their ancestor.

A successful bet, since, a few years after the opening of their brand new distillery, the success is dazzling ...

This edition, Revival V is a Single Malt of great nobility that stands out as a reference in this area.

It has benefited from a double aging: first in barrels of Bourbon, and then in barrels containing Brandy and Cognac ... An ingenious process that leads him to develop a unique aromatic profile! Its finish is fruity, subtly woody, with slight hints of almonds.