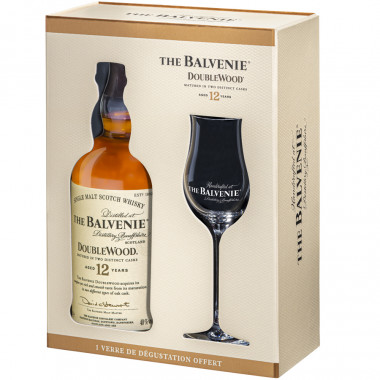 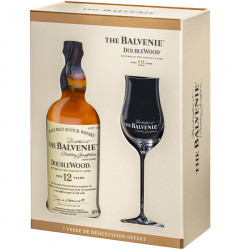 A great Scottish classic from th House The Balvenie, the Balvenie 12 YO Double Woode in box with its tasting glass.

The Balvenie Scottish distillery presents its 12-year-old expression Double Wood in a box that contains a tasting glass..

A Single Malt that has enjoyed double maturation in two types of wood, under the watchful eye of Chai Master David C. Stewart.

This great classic Speyside has aged for at least 12 years in traditional whisky casks, old Bourbon casks and Hogsheads in American oak, then it remains for nine months in old Oloroso Sherry casks in Spanish oak.

Focused on Sherry, this Balvenie reveals a nice roundness with warm notes of spices and citrus.

Nose: mixes the sweetness of sherry with nice citrus and spicy notes.

Taste: fruity on citrus, marked by aging in sherry cask and accompanied by woody touches.

Gold Medal at the 2011 World Spirits Competition in San Francisco.