Sales | Up to 50% off! >
Our CellarOther selectionsCognacLimited Edition H by Hine VSOP 70cl 40° 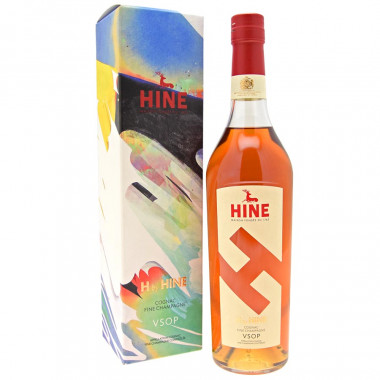 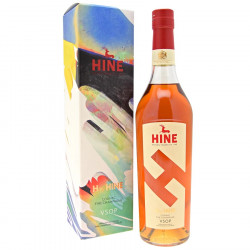 H by Hine offers a beautiful aromatic profile for this young Cognac, a limited edition of Hine.

This limited edition Cognac H by Hine is the result of the blend of brandy from Grande and Petite Champagne grapes.

Appreciated for its vivacity, H by Hine has an amazing aromatic profile despite its young age.

Its expressive notes of iris, apricot, acacia honey and white pepper make it an elegant floral cognac with a springtime look.

Each year the Hine painting prize is awarded to one exceptional artist graduating from the Royal College of Art, London. This limited edition gift box of H by Hine VSOP has been adapted from the painting Kissy Lips (2016) by Ben Edmunds, winner of the 2018 prize.

The Hine house founded in 1763 in Jarnac, in the Charente, has been producing high quality Cognacs for over 2 centuries.

In 1791, the young Englishman Thomas Hine arrived in France, when the country was in the midst of the French Revolution, in search of knowledge on the development of his father's favourite Cognac. He therefore went to Domaine Delamain in Jarnac, in Charente, where he was hired and where he married the merchant's daughter a few years later.

On the latter's death, Thomas took over the estate and gave it his name in 1817: Thomas Hine & Co.

Fifty years later, Hine chose the deer as the emblem of the brand, a symbol of good fortune and prestige, whose head is turned towards England as a reminder of the distance travelled.

Several generations follow one another after Thomas, and Cognac Hine is gradually exported to the United States, China and finally all over the world. In 1962, the Hine house was chosen as the official supplier of Cognacs to the English Court and is today the only Cognac house to hold the Royal Warrant of Queen Elizabeth II.

What makes the success of Hine Cognacs is their finesse, their delicacy and the liveliness of aged eaux-de-vie, borrowed from the richness of the soil and the vines of Grande Champagne.

Hine is also recognized for its original approach to ageing with the "Early Landed" vintages. These Cognacs have the particularity of being sent in barrels across the Channel to age there for around twenty years, taking advantage of the humid climate and milder temperatures of the United Kingdom. The result is more delicate expressions, imbued with aromas of candied orange and gingerbread.