Sales up to 50% off. 2nd markdown : extra 10% off on textile items already on sale! Discover >
Our CellarWhisky Whisky by countryFranceArmorik 10 Years Old 70cl 46° 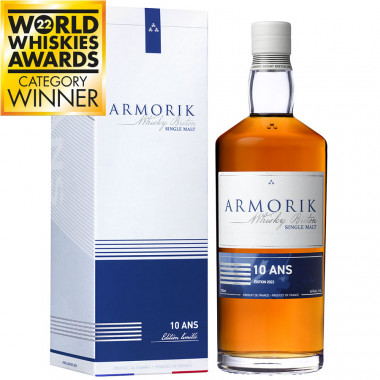 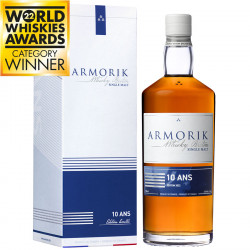 This 10 year old Armorik Breton Single Malt is a limited edition that celebrates the 20th anniversary of the creation of Armorik Single Malt and all the know-how of the distillery.

Aged for 10 years in Bourbon casks, then in Oloroso Sherry casks, this edition presents an evolution towards a balance between power and roundness, rich in notes of exotic fruits and pepper.

Nose: powerful, balanced between fruity and pastry. A touch of vanilla caramel adds to the notes of exotic fruits and almond croissant.

Palate: lively attack with citrus fruits. The roundness comes next with notes of maple syrup.

Finish: very long, very fruity and a hint of pepper.

Winner of the 12 years and under French Single Malt category, World Whiskies Awards 2022.

Reviews
(5/5)
Excellent
Correct products delivered quickly and safely to my address in the United Kingdom at a very reasonable cost. Super service which I will certainly use again. Previously I have done shopping at the Comptoir Irlandais Stores in Brittany.
Keith H.
Armorik 10 Years Old 70cl 46°