Our stores remain open during confinement! I discover the measures >
Our CellarLiqueurs & Other SpiritsGins & other SpiritsGin Monkey 47 50cl 47° 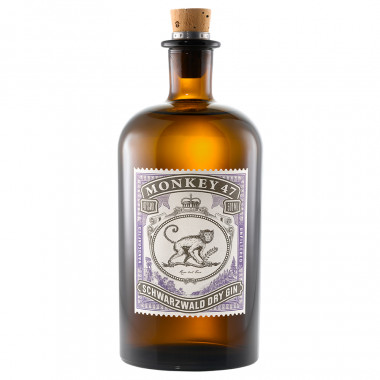 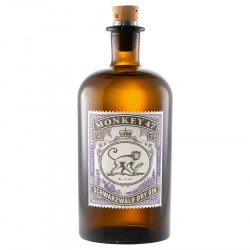 Monkey 47 is a gin concept in the London Dry Gin tradition infused with 47 ingredients for a complex and original result.

Monkey 47 is a 2008 creation by Alexander Stein and his Black Forest distillery. This gin pays tribute to the British Commander Montgomery, himself a producer of gin in the Black Forest in Germany in the 50s.

In a few years, Monkey 47 has become a reference in the world of gin. It has a typical London Dry Gin profile with an attractive nose and light spicy notes of citrus, lavender and balsamic.

The Monkey 47 gin takes its name from its history and composition: 47 plants harvested and prepared in Black Forest spring water for a 47° gin.

The original Monkey 47 gin recipe returns to UK Royal Air Force Commander Montgomery "Monty" Colins. In the aftermath of World War II, he was appointed to Berlin, where he devoted himself to rebuilding the city's zoo, where he became the godfather of an egret monkey named Max.

During this period, he moved to a guest house called "Wild Monkey" in the Black Forest region of Germany, and decided to create his own gin made from juniper, spring water and wide variety of special and local herbs in the purest British tradition. He then gives him the name "Max the Monkey - Schwarzwald Dry Gin".

In 2008, Alexander Stein wanted to recreate this gin from the original recipe with the Black Forest distillery. To honor Commander Montgomery Collins, his monkey Max and the 47 botanicals used in the recipe, Alexander Stein named it Monkey 47.

Nose: fresh and spicy with light and vegetal notes.

Palate: very fresh too, it develops acidulous touches that embellish the more traditional character of gin. The whole is rich and complex with a nice balance of all the ingredients.