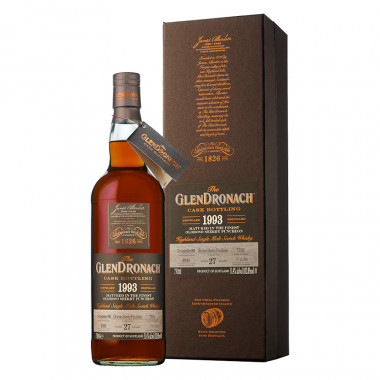 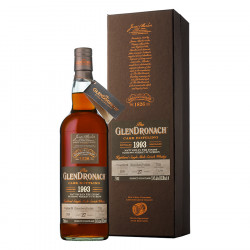 This 27 years old Glendronach is a tribute to the mastery and unique style of the Scottish distillery with a superb aging in Sherry cask.

This bottling is a tribute to the mastery and history of The Glendronach distillery through the exploration of maturation in Spanish sherry casks found in each expression of The GlenDronach.

Bottled in 1993 for an aging of 27 long years in Sherry Olorso Puncheon barrels, this expression is non chill-filtered and keeps all its natural colour.

This Single Cask reveals intense notes of fruits and nuts wrapped in spices with the unique character of Sherry.

Quantity limited to 1 bottle per customer.

Finish: long and full of aromatic intensity on fruits, nuts and some aromatic plants.