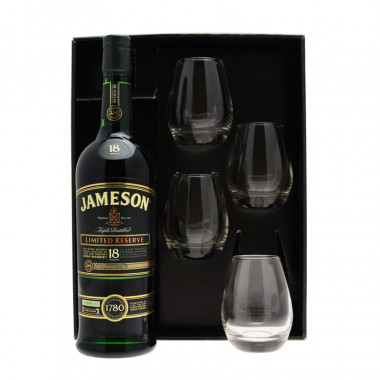 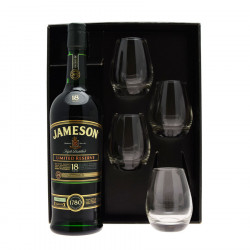 Being the elder statesman of the Jameson family, Jameson 18 Year Old is an exceptionally balanced and mellow blend: a must-have.

The elder statesman of the Jameson family is a exceptionally balanced 18 Year-Old blend created by Barry Walsh, Master Blend of the Midleton distillery.

As 18 Year-Old Jameson Limited Reserve aged beautifully, it results from careful selection of very old Jameson whiskeys. To give them their fiery character and complexity, these whiskeys mature at least 18 years in American Bourbon barrels, and European oak Sherry casks, and finished in first-fill Bourbon barrels for a lovely vanilla mouthfeel. The blend is luscious, mellow, sophisticated with a lingering woody, spicy and caramel finale.

With a limited number of casks, this whiskey is a rare and tasteful spirit: each bottle has been numbered and only a few thousands are available worldwide.

This bottle is in presented in a box containing four glasses.

Finish: long and sweet, concluding on candied fruits and liquorice, for a remarkably balanced overall.