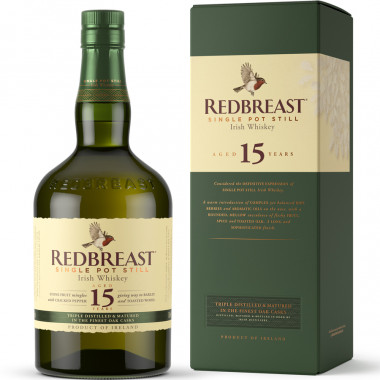 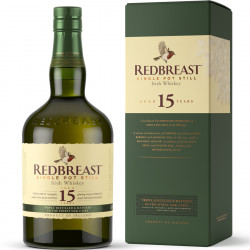 End of 2005, Midleton distillery has bottled for the first time a 15 Year-Old Redbreast. This Limited Edition quite made the buzz when released, so the distillery decided to include this amazing Single Pot Still Whiskey in its standard range. It has been developed on the same basis than the beautiful 12 Year-Old Redbreast, but with more complex flavours, enriched with cocoa beans, Iris flowers and coconuts.

This version was awarded the Double Gold Medal 2011 at the San Francisco World Spirit Competition.

With the creation of a specific appellation, Redbreast became a Single Pot Still.

This appellation is exclusive to Ireland and to Midleton distillery, just as Single Malts are attached to Scotland. We may consider this appellation as the quintessential Irish whiskey style. It is made from equal parts of malted and non malted barley, following the Pure Pot Still whiskey tradition, then triple-distilled in traditional copper stills that account for their complex aromas and wonderful creamy sensation in the mouth.

Nose: distinguished and heady. Opening on grain, lime, curry and camomille scents, slowly fading to evolve on to the famous red fruits (blackcurrant and blackberry) that made the reputation of this Irish whiskey, with lingering notes of vanilla, spices (cinnamon, clove) and candied fruits (apricot).

Finish: lingering with a tannic presence, over an impressive array of fruits. For some, the velvety sensation is extatic pleasure. For others, the delight resides in the syrupy juice, or in the heady exotic perfumes.