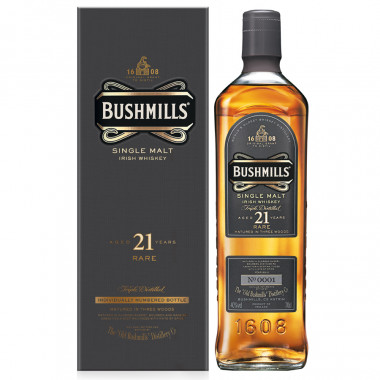 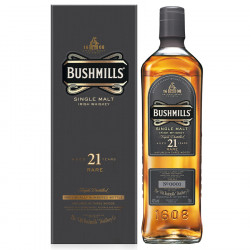 This Single Malt is extremely rare and has been refined in Madeira Wine Casks.

With this 21 Year-Old Bushmills, the Old Bushmills distillery created an Irish whiskey of rare depth, smoothness and complexity.

This Irish Single Malt is extremely rare on the market, as Bushmills only owns a few casks and is the only one in Ireland who released a Single Malt of that age. The other Irish distillery which offers Single Malts only started production in 1989.

Bushmills 21 Years Old is a combination of two 19 and 20 year-old whiskies aged in American oak Bourbon barrels and European oak Oloroso Sherry butts, then blended and finished in Madeira wine drums for at least a year.

The result is a Single Malt that might be of the most elegant and distinguished version of Bushmills, which smoothness is lifted by a touch of spices from the Madeira barrels. It is a refined spirit, fruity, spicy with a wide range of aromas from caramel, dark chocolate seasoned by delicate hints of rancio (nuts) and peppermint.

Palate: distinguished and subtle, very appealing with toffee, peppermint and dried fruits (raisins and almonds) flavours over a vanilla and chocolatey backdrop.

Finish: bittersweet and delicately oaky, it is a subtle combination of sparkling mint and candied oranges, evolving on strawberry, coffee and intense liquorice.

You should ideally start your tasting with a glass of neat 21 Year-Old Bushmills, to discover the aromas, and add a dash of water then to unleash the fruity and spicy aromas of the whiskey. Swap water with an ice cube that will chill your glass but might hold the flavours back: wait a bit for the whiskey to warm up to room temperature.