Sales | Up to 50% off! >
Our CellarWhisky Whisky by countryIrelandTeeling Brabazon Bottling Serie 1 70cl 49.5° 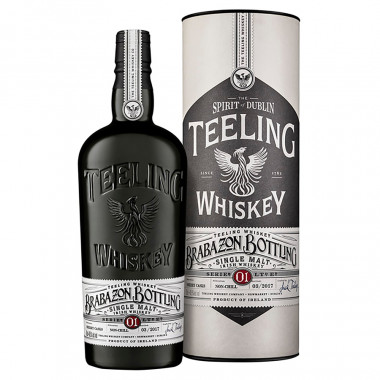 The first limited edition of the collection, Teeling Brabazon Bottling Serie 1 pays homage to the unique role of sherry in aging with a maturation in 6 different casks for an impressive result.

With this bottling, Teeling inaugurated a new collection of whiskeys to pay tribute to the unique role of fortified wines in the finishes of whiskey. The collection also pays tribute to William Brabazon, the 3rd Earl of Meath who presided over Newmarket in the 17th century.

The first limited edition of the collection, Teeling Brabazon Bottling Series 1 highlights the aging of Irish whiskey in Sherry barrels with an assembly of 6 different casks.

The Teeling team has carefully selected a complementary range of vintages, styles and whiskeys aged in sherry casks to present all the aspects and nuances of this exceptional maturation in a Single Malt.

Teeling Brabazon Bottling Series 1 was assembled and bottled in 2017 at 49.5° without cold filtration to preserve all the rich and fruity flavours of this whiskey.