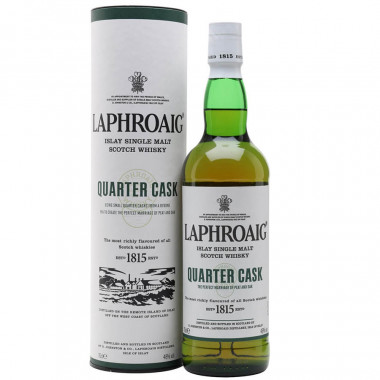 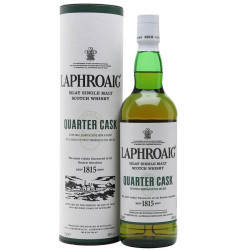 Laphroaig Quarter Cask is an irresistible experience as it has been double matured in small American Bourbon oak barrels. This un-chillfiltered Single Malt has firstly aged in the same way all Laphroaig whiskies do, then the spirit has been transfered to Quarter Casks or small casks, resting in the coastal warehouses of the distillery.

This process sophisticates Laphroaig and revives the use of small casks, a forsaken tradition that harks back to the 19th century. It provides a deeper contact with the oak and brings more sweetness and roundness to the typical peaty Laphroaig.

The result is impressive. The fruity sweetness coats the peat, with a profusion of caramel and vanilla left by the Bourbon barrels and oaky notes, over a lovely swinging between sweetness and smokiness.

Nose: rich and firm. A body of chocolate and heavy peat. After a while in the glass evolves on iodized notes of salt (sea shells) and citrus fruits (oranges).

Palate: perfectly balanced and exceptionally fruity, develops on roasted coffee with notes of tar and rubber, softened by mild spices.