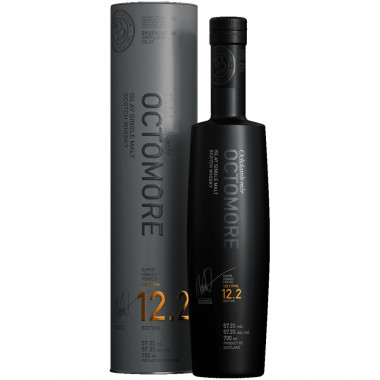 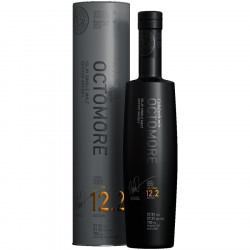 Octomore 12.2 is a surprising whisky. A peat explosion with a Single Malt having benefited from a finish in Sauternes barrels.

Octomore 12.2 is a surprising whisky. A peat explosion with a Single Malt having benefited from a finish in Sauternes barrels.

The now famous Octomore 4.2 (Comus) has become one of the most acclaimed whiskies in the Octomore range and the most sought after in the distillery, confirming that the heavy peat combined with the mellow Sauternes wine is an incredible pairing.

This Octomore 12.2 Single Malt has spent three and a half years in old American oak barrels, building a solid base of fruity and floral spirit before being finished in Sauternes barrels of impeccable quality. With an additional maturation of 18 months, the Sauternes casks play a pivotal role in this whisky by providing supercharged fruit. Melon, white peach, honeysuckle, and coconut add real touch and sweetness to complement the peat moss of this strongly phenolic malt.

-Malted to 129.7 PPM,
-Distilled in 2015 from the 2014 harvest of 100% Scottish grown Concerto barley,
-A 50/50 combination of 1st and 2nd fill American whiskey casks which were vatted together in 2019 and, finished in first fill French Sauternes wine casks,
-Matured entirely on Islay for five aged years,
-Bottled non chill-filtered and colouring free at Bruichladdich Distillery,
-Bottled at 57.3% alc./vol.

Character: the Sauternes casks brings another dimension to the vitality of Octomore. The honey-soaked fruit and dry smoke work beautifully together; that classic combination of smoke and sweet fruit delivers beautifully again.

Nose: beautiful notes of melon, honey and smoked almonds initially. Toasted oak and earthy smoke are held back by layers of fruit and honey. There is orange peel, peaches, ripe sweet melon, a lemon and honey combination all wrapped in a malted grain sweetness. Dried apple and pear drops come next with a wave of peat smoke and toasted oak, releasing earthy and pine resin notes.

Palate: lusciously soft and sweet as the fruit sweeps across the palate, lemon zest and vanilla pods come to the fore with melon and orange blossom. Another sip highlights the structure the French oak brings with caramel, baking spices and a touch of dryness carrying the smoke and the malt sweetness. Always, the presence of ripe fruit drizzled in syrup speaks of the influence of the Sauternes casks.

Finish: on the finish, a salty lemon tang arrives as the fruit and oak fade a little. That lovely earthy peat smoke moves in to dominate the finish and stamp the Octomore DNA all over this dram.