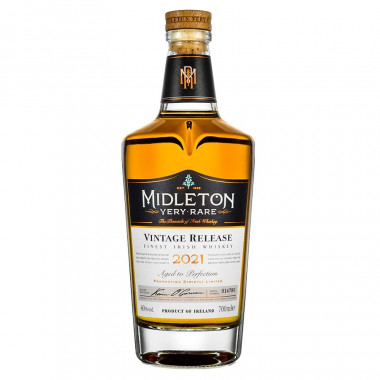 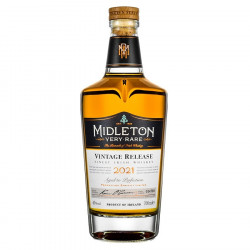 An exceptional and essential whiskey, this new 2021 vintage offers a beautiful complexity between floral scents, fruity aromas and malty notes.

Midleton Very Rare is a unique blend produced in very limited quantities since 1984. Since then, the distillery has offered us a new rare and vintage edition every year. Master Distiller Barry Crockett selects and blends the best casks from the Middleton Distillery.

Indeed, this whiskey is the result of a blend of Single Pot Still and Single Grain aged from 15 to 36 years in ex-Bourbon casks of first or second filling. Each bottle is numbered and signed by the new master distiller of the Kevin O'Gorman distillery.

This exceptional and indispensable Irish whiskey offers us great complexity, we find floral scents mixed with fruity and malty notes as well as a bouquet of spices.

The complete whiskey production has been relocated in Midleton, near Cork, where a new distillery has been built. Midleton is located near the distillery of the same name, founded in 1825 by the Murphy brothers.

Midleton distillery is one of the most modern distilleries worldwide. Its production capacity reaches 19 million liters of alcohol per year; with 13 stills producing every type of Irish whiskeys (Irish Pot Stills, single malts, and single grains). The ancient buildings of the distillery have been kept and turned into a museum.

Named “The Jameson Heritage Center”, we may admire an amazing water wheel from 1852, a stationary steam machine used to power the distillery and the biggest still the world. It is in one of these old Georgian architecture stone buildings with red shutters that Barry Crockett, the current Midleton distillery Director, was born. The Old Midleton style: even with a great range of expressions, Midleton’s whiskeys develop a unique character. They have a specific fruity nose (red fruits) with a spicy backdrop and sweet notes of grains. The distillery produces exceptional pure pot still whiskeys, such as Redbreast.

Nose: rich and sophisticated, with accents of citrus (orange, lemon), spices (peper), cereals (barley) and wax over a woody background.

Palate: elegant and round, in harmony with the first scents. Developing onto precise notes of exotic fruits (mango, passion), red fruits (redcurrant and blackcurrant), and flowers (peonies, roses).