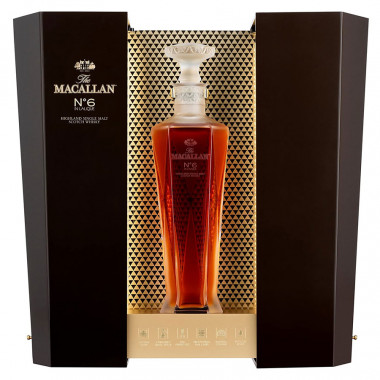 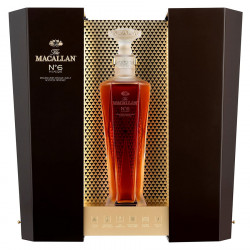 This Macallan No. 6 from the Masters Series 1824 range is a sumptuous Single Malt in an extremely fine Lalique crystal carafe.

Macallan n°6 is part of the Masters Series 1824 range that brings together the finest of Macallan expressions in decanters with a prestigious and refined design.

This expression is rich and complex, made from first fill oak barrels impregnated with Sherry. These casks were elaborated in Spain by the master craftsmen of Jerez de la Frontera and selected within the same cooperage to guarantee the quality and the unique character of this bottling.

The latter offers a rich and powerful tasting with a strong presence of spicy aromas, dried fruits brought by the aging in Sherry barrels with the typical character of the house Macallan.

This Single Malt is presented in a magnificent Lalique crystal decanter whose refined craftsmanship highlights the art of making this whisky.

Nose: rich, influenced by Sherry, with aromas of dried fruits and spices accompanied by a hint of vanilla.

Palate: powerful with a strong presence of spices and dried fruits. Oranges join the bouquet with the typical character of the house Macallan.