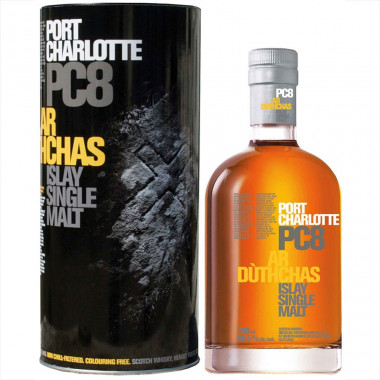 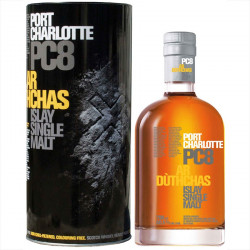 This whisky shows surprising strength, as a free, self-confident spirit, and as independent as those who crafted it.

This exceptional Single Malt is the fourth edition released by Port Charlotte distillery, commercialised by Bruichladdich distillery. Named "Ar Dutchas", this bottle pays a tribute to the Gaelic ancestors of Islay, but also to the heritage and values passed on the next generation.

This whisky shows surprising strength, as a free, self-confident spirit, and as independent as those who crafted it. At 40ppm of peat strentgh, refined in American oak cask and grading 60,5° at cask strength, Port Charlotte PC8 is quite the manly spirit.

Port Charlotte is a whisky distillery located on the isle of Islay, which has been established by the neighbouring Bruichladdich distillery.

It has been established in the buildings of the former Lochindaal distillery. Located in the heart of the Port Charlotte village, Lochindaal has been founded in 1829 by Colin Campbell. It had to close down in 1929, hit by the prohibition laws enforced in the United States. Bruichladdich announced the creation of a new distillery in 2007, and today Port Charlotte produces the peated whiskies of the Bruichladdich group, together with the Octomore editions bought back in 2012 by the Remy Cointreau group.

A rare fact in Scotland, the Bruichladdich distillery (“Bruk-ladie”) uses a brewing vat in open air. Its onion-shaped stills have a very flat bottom and a long neck. During the distillation process, the alcoholic vapours rise very slowly, imparting to the whisky its elegance and refinement.

Nose: seaspray of peat smoke battering spicy aromas of lemon and deeper scents of heather and myrtle. Sweet oak and malted barley appear in a lull, just before the next wave bashes in.

Finish: admirable. This expression shows that the characteristic maturation of Port Charlotte brings in formidable marine notes, and unfathomable depth to the sweet oakiness.