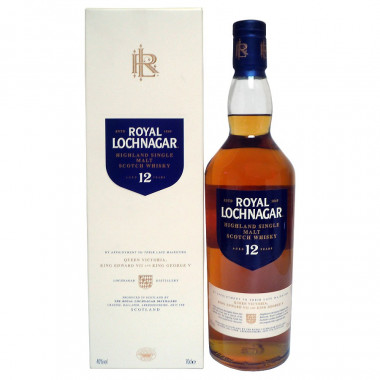 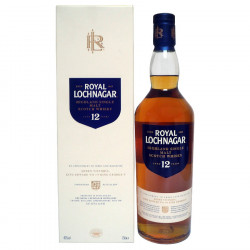 Royal Lochnagar is a 12 Year-Old Single Malt with perfect balance between fruits and mild spices.

Subtle with fresh woody notes, this medium-structured Single Malt aged for 12 years in oak barrels (second filling bourbon). The distillery is located in a forest region, on the banks of the Dee River that crosses the Balmoral Castle property. The quality of its waters account for the fabulous flavours of this Highlands Malt, marked by a perfect balance between fruits and mild spices.

The Royal Lochnagar distillery is located on the banks of the river Dee, not far from Balmoral castle in the Highlands, Scotland. In 1848, Queen Victoria chose Balmoral as the summer house of the Royal family. A while after, John Begg, Lochnagar Master Distiller, invited Prince Albert to visit the distillery, knowing he was into mechanics. The Prince accepts the invitation and comes with his wife, Queen Victoria, and their three kids.

Impressed by the experience, the Queen grants John Begg the “Royal Warrant of Appointment”. Since then, the distillery regularly hosts presitigious visitors, such as British MPs enjoying a moment of relaxation between two meetings with the Balmoral Monarch.

Royal Lochnagar is one of the smallest distilleries of Scotland. Rebuilt three times, it always kept its original appearance and the aspect of a genuine traditional distillery, with its pagoda roofs and its open mashing vat. The visitor’s center is doubled with an area dedicated to the tasting of malt whisky.

Nose: needs a while to open up. The first hit reveals varnished wood and butter caramel notes. Linseed oil undertones develop with an acidity reminiscent of litchi. A dash of water unleashes this tangy tang and softens the nose, preserving its woody character, fresh and pleasant, lingering on warm sand notes. Later, coffee puffs and sugar cane rise from the glass.

Finish: medium long, with a very pleasant note of sandal wood that lingers.