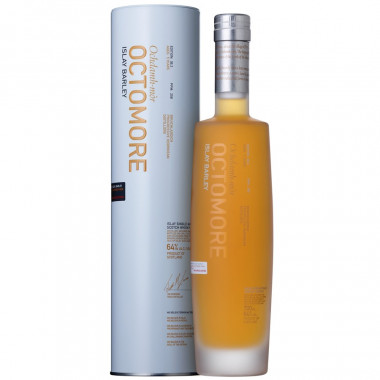 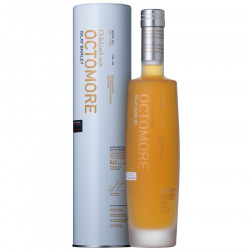 With 258 ppm, Octomore 6.3 is undoubtedly the most heavily peated Single Malt in the world.

Going far beyond the limits already pushed by the last releases, Octomore 6.3 is a Single Malt peated beyond measure, with a daunting 258ppm* that has never been reached before. This new version of the world's most heavily peated Single Malt distilled by Bruichladdich does not stop here. Under the peaty character that washes the palate with a wave of smoke and ashes, this whisky develops a wonderful aromatic depth.

Extremely peated, the whisky is also quite refined and rich with a unique, warm character. It has been aged for five years in Bourbon barrels. This Single Malt truly poses as a challenge set by the Bruichladdich distillery. Rare, unbridled, exceptional, Octomore 6.3 is a technical, fascinating whisky, clearly reaching out to aficionados.

For this new edition, Bruichladdich only used Islay barley grown on the distillery's lot. It has been bottled at cask strength and grades 64°.

Nose: powerful and marine. The first inhalations take you on the West coast of Islay where roaring waves break on the shore and drizzle on the blossoming moor. Harmonious, with floral and fruity notes of myrtle, mint and heather. Wild thyme and shamrock mingle gently in the heavy vapours of smoke peat.

Palate: as the peat has completely warmed up and enveloped the palate, only then rise notes of red grapes and cherries, combined with caramel, bitter dark chocolate and scents of woody maple syrup, perfectly balanced.

Finish: of amazing length and strength, expresses the full Octomore temper. Heaves the heart and warms the mouth.