Our stores remain open during confinement! I discover the measures >
Our CellarArchivesGlenfiddich 1972 Very Rare 70cl 48.9° 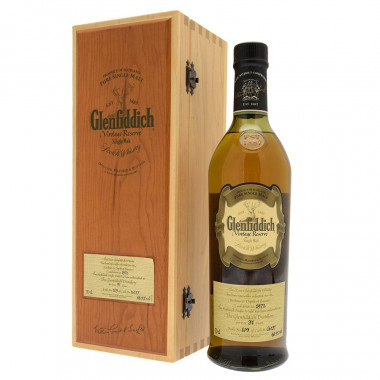 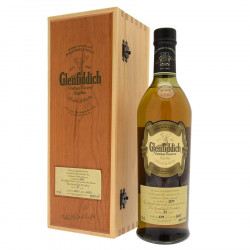 Glenfiddich Vintage Reserve presents this exeptionnal Single Malt, selected for its aromas and unbeatable quality. This Single Malt was distilled on october the 3rd in 1972, it has been aging for 31 years in oak casks with remarquable flavors, n°16037. It has been bottled on april 21st 2004 and pictures among the 270 limited edition bottles. Every single casks of the Glenfiddich reserve is absolutly unique.

The steep-sided valley where the Fiddich River flows, gave its name to the best-selling malt in the world.

The distillery is located on the banks of the river in Dufftown. Fiddich translates as “stag” from Gaelic and here’s why the animal is now the emblem of the distillery. This famous distillery has been established in 1886 and is still in the hands of the same family (as a limited company). In 1963, the company bet on spreading the Single Malt outside the borders of Scotland – which was considered as pure folly by blended scotch producers, deeming Single Malts as too intense, too richly aromatic or too complex for non-Scots drinkers. Glenfiddich remained traditional and is still heating its small stills with coal and ageing spirit in casks. The whiskies, aged in different woods, are blended in the Glenfiddich cellars, and bottled “at the chateau”! In fact, the distillery overlooks the complete bottling process. Glenfiddich is proud to own the most rewarded Single malt whisky range in the world.