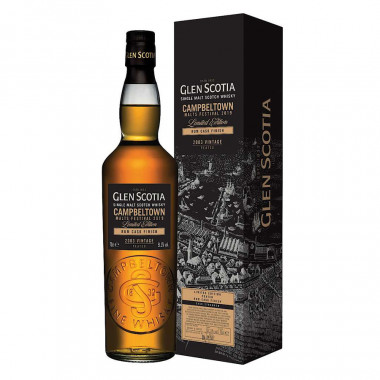 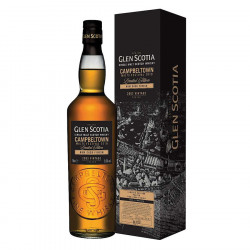 Glen Scotia 2003 Peated Rum Finish is a peat limited edition with sweet notes created during the 2019 Open House of the Distillery.

Located in the heart of the former whisky capital, Glen Scotia is now the third distillery in Campbeltown to hold a whisky license. This town south of the Kintyre peninsula was the former theatre of what could be called the "barley rush" and housed about thirty distilleries around 1880 including Glen Scotia founded in 1832.

To celebrate the Campbeltown Malts Festival 2019 and the open doors of the distillery, Glen Scotia released this limited edition distilled on 2003 from peat barley.

This peaty Single Malt has aged for 15 years in American oak barrels bringing this whisky a sweet peat smoke embellished with citrus and spices, a signature of the Glen Scotia Distillery.

Glen Scotia distillery was created in 1832 by the Galbraith family. It's one of the last distilleries with Springbank remaining in Campeltown.

It is told that Glen Scotia distillery is hanted. Duncan MacCallum's ghost, an ancien owner, killed himself in december 23rd 1930 drowning in the Crosshill's Loch. At the end of the 20th century, the distillery closed several times and the activity has sporadic. The distillery was bought byLoch Lomond. With a new fresh style Glen Scotia whisky is splendide.

The Glen Scotia whisky production starts again in 1933. In 1954, the distillery is bought by the company Hiram Walker, who sells it then to A.Gillies and Co a year later. In 1970, Glen Scotia belongs to "Amagamated Distillers Products" after A.Gillies and Co absorption. Gen Scotia closes in 1984 before oppening again in 1989 when the company is bought by "Gibson International". The production stops again in 1994 when the distillery was taken by Glen Catrine Bonded Warehouse Ltd. In 2000, Loch Lomond distillery places his workers at Glen Scotia and got the activity back on track.

Finish: long and dry with smoky notes of peat, cinnamon and ginger.
Reviews