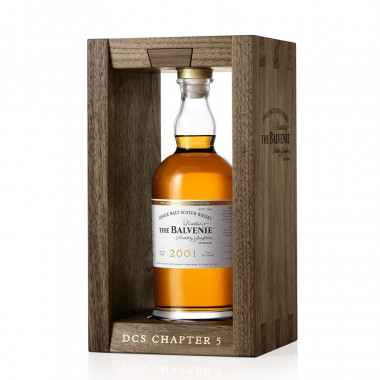 Chapter 5 of the DCS collection aged 17 years in Fino Sherry Butt cask for unique aromas of fruits and caramel.

This expression Balvenie is the 5th chapter of the DCS collection. The Balvenie DCS Compendium is a whisky collection named after its creator David C Stewart, one of the oldest Malt Masters in the Balvenie Distillery. The result is a magnificent collection with a selection of 25 Balvenie barrels, divided into 5 chapters.

This chapter 5 is a Single Malt aged 17 years in Fino Sherry Butt cask in European oak with the number #9325. It reveals aromas of fruit from the orchard, cooked plums and dried apricot on the nose, followed by notes of orange and salted caramel, grapefruit and spicy apple.

Nose: fruity, generous on the aromas of orchard fruits, plums and dried apricots.

Finish: creamy, fruit from the orchard and a creamy malt.