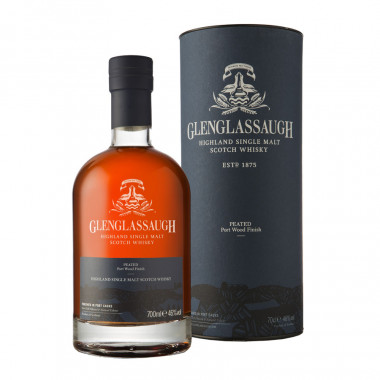 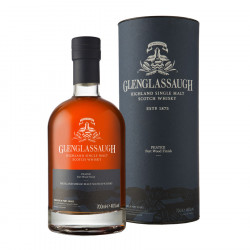 Glenglassaugh Peated Port Wood, with peaty, fruity and spicy notes, is finished in virgin American oak casks and then in ex-Porto casks.

Glenglassaugh Peated Port Wood is the first of four Wood Finish Collection Single Malts launched at the end of 2017 at the Scottish Distillery. This series is distilled only from barley produced locally.

Non chill-filtered, natural colour, this whisky was bottled at 46°.

The Glenglassaugh Distillery, located at the edge of beautiful Sandend Bay in the Scottish Highlands, has remained silent and forgotten for more than two decades. Its legacy dates back to 1875 when the distillery was founded by Colonel James Moir.

Glenglassaugh is pronounced "Glenglassa" means "valley of the gray-green place" and it comes from this beautiful environment in the Scottish Highlands.

This blazon represents the important link between the distillery, the sea and reflects the coastal environment. It also tells how whisky has always been on the market long before the construction of the distillery. Originally the distillery was the site of a trafficker where unlawful distillation took place.

Glenglassaugh is the only distillery to enjoy in a unique location on the border of Speyside and the Highlands and by the sea, this Scottish distillery reveals three distinctive characteristics in its whiskies: the Speyside bringing a tropical sweetness, the Highlands adding depth and richness and the sea giving the whisky a marine character.

Closed in 1986, it is relaunched in 2008. The distillery is a true renaissance, celebrated by the launch of Glenglassaugh Revival, a beautiful Single Malt having enjoyed a barrel finish of Oloroso sherry and many other whiskies ...