Sales up to 50% off. 2nd markdown : extra 10% off on textile items already on sale! Discover >
Our CellarWhisky Whisky by countryJapanHyōgo PrefectureAkashi 10 Years Old Sherry Cask 50cl 60° 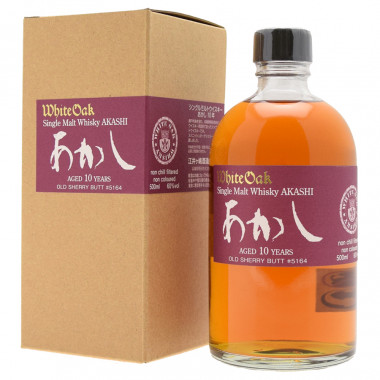 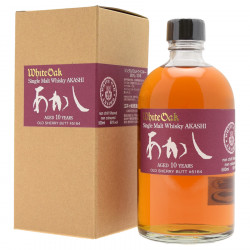 One of the finest Japanese whiskies in the Akashi range, this 10-year-old has enjoyed a maturation of 10 years in Sherry barrels.

The White Oak distillery has developed its Single Malt from Sherry butts, barrels with a capacity of 500 liters which color and impregnate whisky with rich flavours (nuts, chocolate, dried fruit, roasting).

Akashi 10 years old Sherry Cask is thus a beautiful Japanese whisky aged for 10 years and possessing an aromatic palette of abundant dried fruits, sherry wine and spices. It is intense and unique.

This is one of the greatest successes of Akashi.

Nose: it is rich and spicy with delicate notes of dried fruit, vanilla, and chocolate.

Palate: intense, it quickly develops aromas of wood and sherry with grilled and spicy flavours. We find dried fruits, aromas of red fruits and grilled almond.

Finish: it is prolonged with notes of fruity wines and raisins.