Sales up to 50% off. 2nd markdown : extra 10% off on textile items already on sale! Discover >
Our CellarWhisky Whisky by countryIrelandPowers 12 Years Old John's Lane Release 70cl 46° 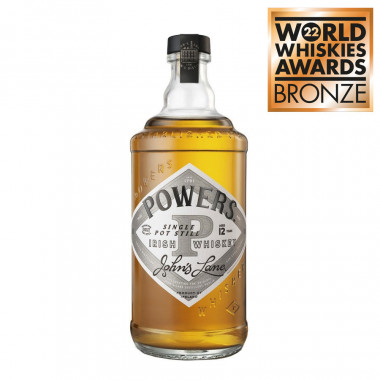 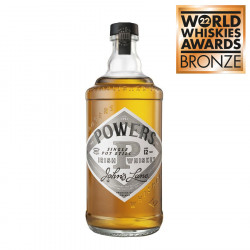 One of the most appreciated in Ireland, this specific release of Powers whiskey develops deep, beautiful flavours and pays a tribute to the now closed old Powers distillery where it was first crafted.

12 Year-Old Powers John's Lane Release has been elaborated in Midleton distillery, located 30 minutes away from Cork. Made from equal parts of malted and non malted barley, then triple-distilled in copper stills, this Irish Whiskey revives the "Pure Pot Still Whiskey" tradition.

Its name pays a tribute to the original Powers distillery, John's Lane, renowned for its "Pot Still Whiskey" quite famous in Ireland. In 1975, John's Lane distillery closed its doors and the whiskey production moved to Midleton distillery. The ageing process was nevertheless maintained and new stills crafted to preserve and increase the depth of Powers' and other Irish whiskeys' inner flavours.

12 Year-Old Powers John's Lane Release celebrates the traditional origins of Powers whiskeys and reveals the secrets of their fame. This Single Pot Still release develops deep and beautiful flavours. It has been matured twelve years in first-fill American Bourbon barrels and finished in Oloroso Sherry casks.

Nose: lots of earthy notes, such as leather and tobacco, with layers of charred wood, dark chocolate, toffee and molasses.

Palate : rounded and spicy, with clear notes of vanilla, honey and apricot.

Finish: long and sweet, with notes of honey and toasted oak.