Sales up to 50% off. 2nd markdown : extra 10% off on textile items already on sale! Discover >
Our CellarWhisky Whisky by countryJapanNikka Pure Malt Black 50cl 43° 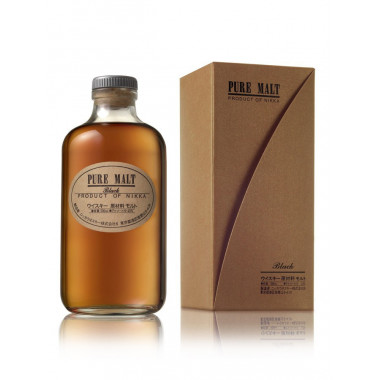 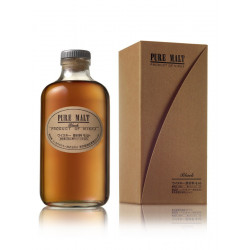 A Japanese whisky with bold character and perfect balance of fruits and peat.

Nikka Pure Malt Blackis a combination of Single Malts, with a high percentage of Yoichi, a peated malt produced by the eponymous distillery located on Hokkaido island. This Nikka of bold character, draws from the Red version its sweet fruitiness and from the White its peated notes. This whisky of great complexity develops an aromatic palette of rare depth.

Nikka Pure Malt is a vatted malt, a combination of Single Malts. It contains a high proportion of Yoichi Single Malt.

As the Taketsuru family owned a sake brewery (fermented rice spirit), Masataka Taketsuru had always been fascinated by the world of whisky. On a journey to Scotland, he took classes in Glasgow University being the first Japanese ever to learn the art of whisky making.

There he meets Jessie Roberta (Rita) with whom he immediately falls in love, and against the wishes of their families, they marry in Glasgow in less than a year. Armed with his knowledge and experience, Masataka returned to Japan accompanied by his wife, who gave him great support in his project.

In 1918, he was hired by the company Settsu Shuzo to produce the first Japanese whisky, but the company went bankrupt in 1922 following the stock market crash.

Nose: smooth, refined, with a peppery fruitiness (mirabelle plums and peach) and zesty citrus. Evolves onto a marked smokiness and dark chocolate.