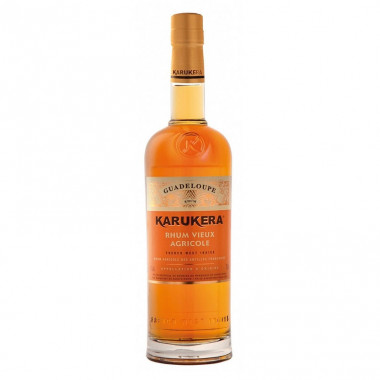 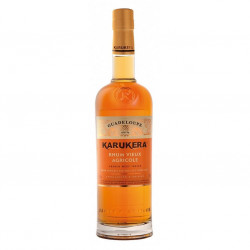 The old agricultural rum Karukera has been aged for more than 3 years in a 350 liter Cognac cask. This pure cane juice rum has received numerous awards.

The old agricultural rum Karukera has been aged for more than 3 years in a 350 litre Cognac cask. It's ageing in the Caribbean climate accelerates the ripening period of rums and fully develops their subtle aromas.

This version is an excellent introduction to the flavours of old rums from the Karukera range.

This rum has received numerous awards in international competitions between 2014 and 2017.

The history of Karukera rum is linked to that of Longueteau rums. When in 2005, François Longueteau took over the agricultural estate of the Marquisate of Sainte-Marie and his "Esperance" distillery with Grégoire Hayot to create an entity intended to enhance the rum from the distillery through ageing.

Karukera means "Island of Beautiful Waters" and refers to the first name given to Guadeloupe by the Indians before the arrival of Christopher Columbus.

It is within the domain of the Marquisate of Sainte-Marie, in Guadeloupe, dedicated to the cultivation of sugar cane and the production of rum, that the Rhumerie Karukera carries out all stages of production: maturation, reduction, brewing and ageing in oak barrels which once contained Cognac, Sherry or Sauternes.

This mastery makes it possible to tend towards high quality rums. Karukera offers a wide choice of rums for every occasion of consumption, for tasting or in cocktails.

Palate: the notes of pepper are even more present.

Finish: long and intense, on spices, orange and vanilla.

Gold Medal at the Destille Fair in Berlin 2017.

Bronze medal at the Allwines Competition for the best French wines and spirits in Asia 2015.

Platinum Medal at the 2nd Tasting of the Best French Wines & Spirits in Germany 2015.